A War of Whispers

Area control strategy games representing war have a very long history, reaching at least as far back with La Conquête du Monde over 65 years ago. One feature of the genre is that many of its titles can be rather lengthy affairs, one can think back to long games of Risk stretching for hours on end or trying to assemble a group to play Twilight Imperium and having a rough go of it due to the time it takes. A War of Whispers however, has all the drama and tension of a much longer game in a hour-ish package. A War Whispers achieves this by instead of it being a game where you control nations, you control a secret society with members in positions of power across nations in conflict.

In A War Whispers the map is split across five great empires, the Bear, the Falcon, the Elephant, the Lion, and the Horse. You will play as the Raven, the Rat, the Spider, and the Snake; four secret societies pulling the strings behind the curtain. At the beginning of the game you will randomise how your faction feels about the five empires: Devoted, Dutiful, Affiliated, Unallied, and Opposed. This will affect how cities owned by the empires will give you points at the end of the game. Each of the empires has four positions on its council acting in turn: Sheriff, Steward, Marshall, and Chancellor, each of whom has one or two different actions you can take with their turn. Over the course of four turns around the table, you will determine the fate of the continent and the empires. At the start of each of the four turns you will start by placing agents in the councils and after that has happened you will act for each of the five empires in turn, if a slot in a council is not occupied by an agent then whoever controls the next most powerful controlled agent determines the action taken. With these actions you will manipulate the flow of war in order to behoove the factions you favor and ruin the faction you oppose. Once the turn tracker has done four orbits the war will end.

The game presents a fascinating puzzle, with a small hand in the affairs of some or all of the empires you get a hand on the wheel but are fighting with control with other players who have hidden motives, it can become very clear which faction a player may be devoted to or opposed to, but sussing out their other allegiances may be difficult. Additionally after each of the first three rounds you can reveal information, you can expose two of your loyalties in order to swap their positions, and while this can give you a better situation on the board your opponents will know what some of your desires are at the table and will be able to adjust their strategies appropriately. A War of Whispers is an excellent adition to any collection that gives loads of intrige in a short amount of time.

A War of Whispers is available now from our webstore. 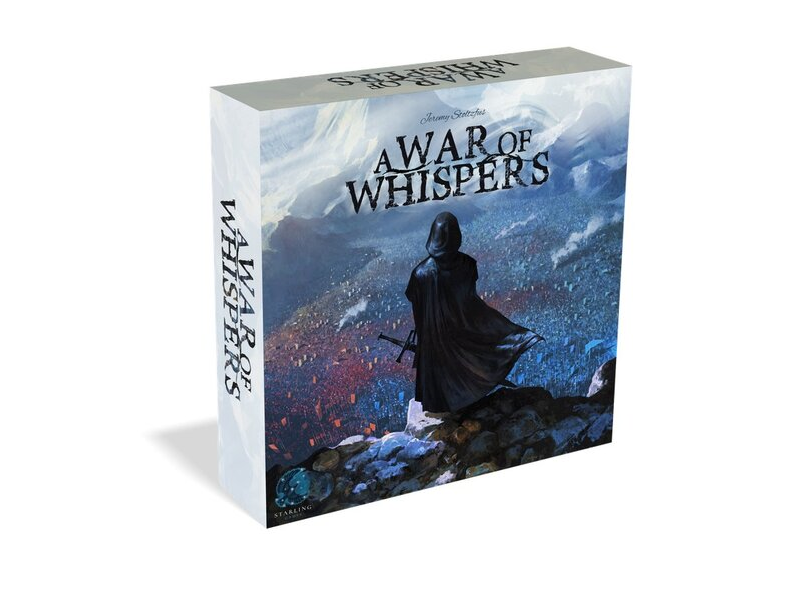