Aftershock: San Francisco and Venice is a fun game about rebuilding our beloved city after the bay area’s worst nightmare - a mega-earthquake! With the city splintered into small islands, each player will work to bring back a strong population and reliable infrastructure. However, this is not a cooperative process! You will vie for each territory attempting to be the most populace in scoring districts, and control as many bridges as possible.

In Aftershock, the first phase of each round will see players purchasing cards from a randomly dealt hand of eight resource cards. You will start with $15 million to work with (cards are each between $1M-$6M), but you definitely want to spend conservatively. Once you’ve made your choices, your leftover cards create a store for your opponents to choose from! You’ll now buy cards from everyone else, handing over your funds to your opponents, which makes for a pretty fun cyclical mechanic of buying and selling as a group.

The second phase is when you will play your purchased cards for their corresponding resources, placing Meeples in the city and strategically planning where to place your bridges, as well as collecting Influence (for scoring) and Aftershock tokens (for shifting your opponents’ population). Bridges allow your Meeples to flee during an Aftershock to a connected region, and will generate you some additional income as you charge other players a toll for those same routes.

Finally, in the scoring phase, each player will secretly select four of the ten territories on the board to score, and/or the “most bridges” category. If more than one person voted for the same territory/category, it will score! This opens up a round of negotiation before selections are revealed, which can make for some interesting agreements. However, if a player purchased any Influence in the first phase, they can use that as a second vote for a particular territory, bypassing the need for tenuous interpersonal relationships.

Overall, it is a really fun game! I am very much looking forward to playing again. The purchasing phase is particularly enjoyable, driving some dynamic choices - Should I keep my Bridge cards to expand my industrial reach across the board, or should I wait to see if someone else will have it available, allowing me to get it at a cheaper price? Should I spend a large portion of my money on the big-play cards, or sell them to my rivals hoping to save for a big swing in the next round? There is plenty of room to employ diverse strategies here while maintaining a competitive edge regardless.

The Aftershock Phase is also great, rewarding careful forethought and an eye for cascading Meeples. I chased off a few of my opponent’s Meeples using an Aftershock to claim the heart of San Francisco, counting my precious victory points early, only to have another Aftershock in Oakland cause a different opponent to end up tying me for the island. Splitting victory points is never ideal…

Add to all this the whimsical familiarity of the setting (bar the nightmare-inducing, post-apocalyptic accompanying story), and you’ve got yourself a winning game night! Come by to pick up a copy, and/or feel free to check it out from our Games Library at our Monday Game Night! See you there. 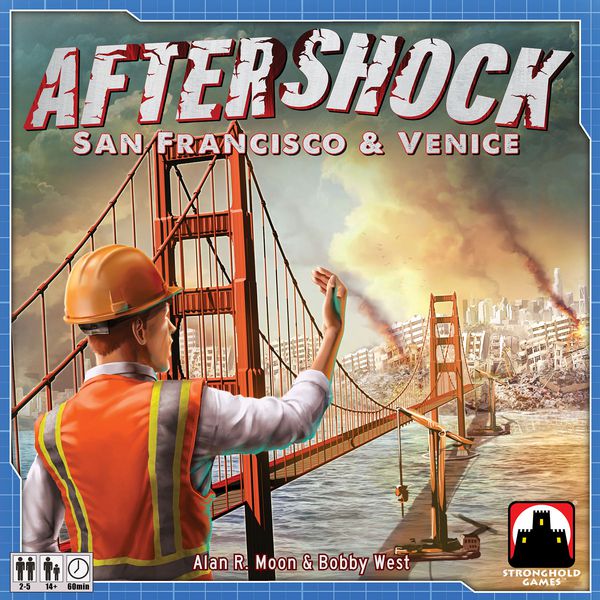