Aquatica is a one to four player game by Cosmodrome Games and Arcane Wonders, and has a playtime of about an hour. In the game, you’ll be playing the ruler of an underwater civilization, seeking out new locations to exploit their depths for resources.

In Aquatica, you will be procuring location cards from the main board by means of either might or coin, and then sliding them into the super cool three-tiered player board in front of you. This player board is what makes playing Aquatica such a unique experience! Each of the five slots for locations has a recess which allows the card to be slid underneath the top layer so that only the next Depth Icon is showing, presented in little bubbles on the bottom-left of each card. We’ll come back to the bubbles in a moment.

On your turn, you will be playing a Character Card from your hand which will stipulate which actions you must take in a particular order. Everyone starts the game with the same Character Cards to start (unless you’re using the “advanced” rules which provide an asymmetrical King Card to each player), and over the course of the game you’ll be adding new ones to your hand. After you’ve resolved those actions, along with any combos from other sources, you’ll be free to use additional actions either from your location depths (the bubble icons), or from your cute little manta ray tokens! As these are your only physical resources in the game, any might or coins you generate disappear at the end of the turn, so you’ll need to plan your combos well.

When using these bonus actions from location depths, you’ll slide the location card up to the next icon, which may be usable again immediately. Once you reach the bottom of a card with all depth icons tucked under the player board, it can be “scored,” which means you’ll remove it from your player board and add it to a face-down pile. In order to do this, though, you’ll need the scoring action, which might be found in a different location’s depths, or from a character card.

In this way, once you have collected multiple locations, you might be pulling off some incredible combo turns that let you perform a bunch of actions all back-to-back, hopefully culminating in scoring multiple locations at once. This game can certainly be described as an “engine builder” for this reason, but unlike other engine-building games you might be familiar with, your engine is usually quite temporary, allowing large sweeps only to be followed by starting over completely on the following turn.

The Goals at the top of the board can be accomplished during any of your turns throughout the game, but require one of your manta tokens to claim the spot, so choosing when exactly to sacrifice a bonus-providing token can be a very strategic prospect as well.

Overall, I am a big fan of the game. The three-tier player board and the process of raising location cards by exploiting the depth icons feels really unique, and I think this game will satisfy that “something different” itch quite well. Learning how to build up combos well without completely exhausting your player board all at once is definitely a give-and-take balance I have not quite perfected yet, but I look forward to trying again every time.

There are some rules interactions about when certain icons can be exploited and how they might impact other bonuses in terms of timing sequences that (as far as I know) have not quite been worked out, but the BGG forum is alive and well with the game designers weighing in frequently. Outside of the random fringe case, I myself have not run in to anything I couldn’t logic my way through.

The hand management aspect of the Character Cards is always great, and is one of the things I love about Century and Concordia as well, so that honed mechanic paired with the uniqueness of the location cards makes this game very playable. Add to that some really cute plastic manta tokens and I’m sold!

This game is definitely worth checking out if you’re in the market for a fun, new game with a fresh mechanic and a neat theme. Let me know your thoughts!

Aquatica is available now from our webstore. 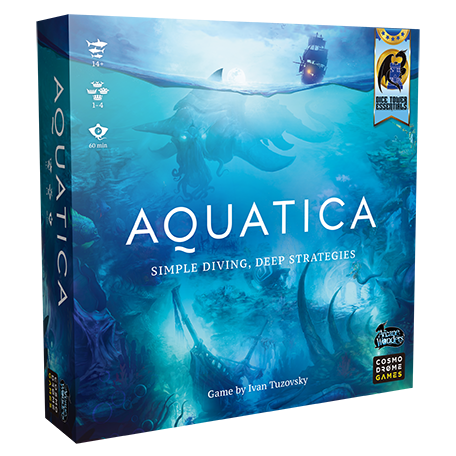