Black Angel is a 1-4 person strategy game from Pearl Games where you play an AI trying to best manage a ship carrying humanity to a new planet. Along the way, you'll need to interact with different alien species, fight off Ravagers trying to destroy your ship and research new technologies. 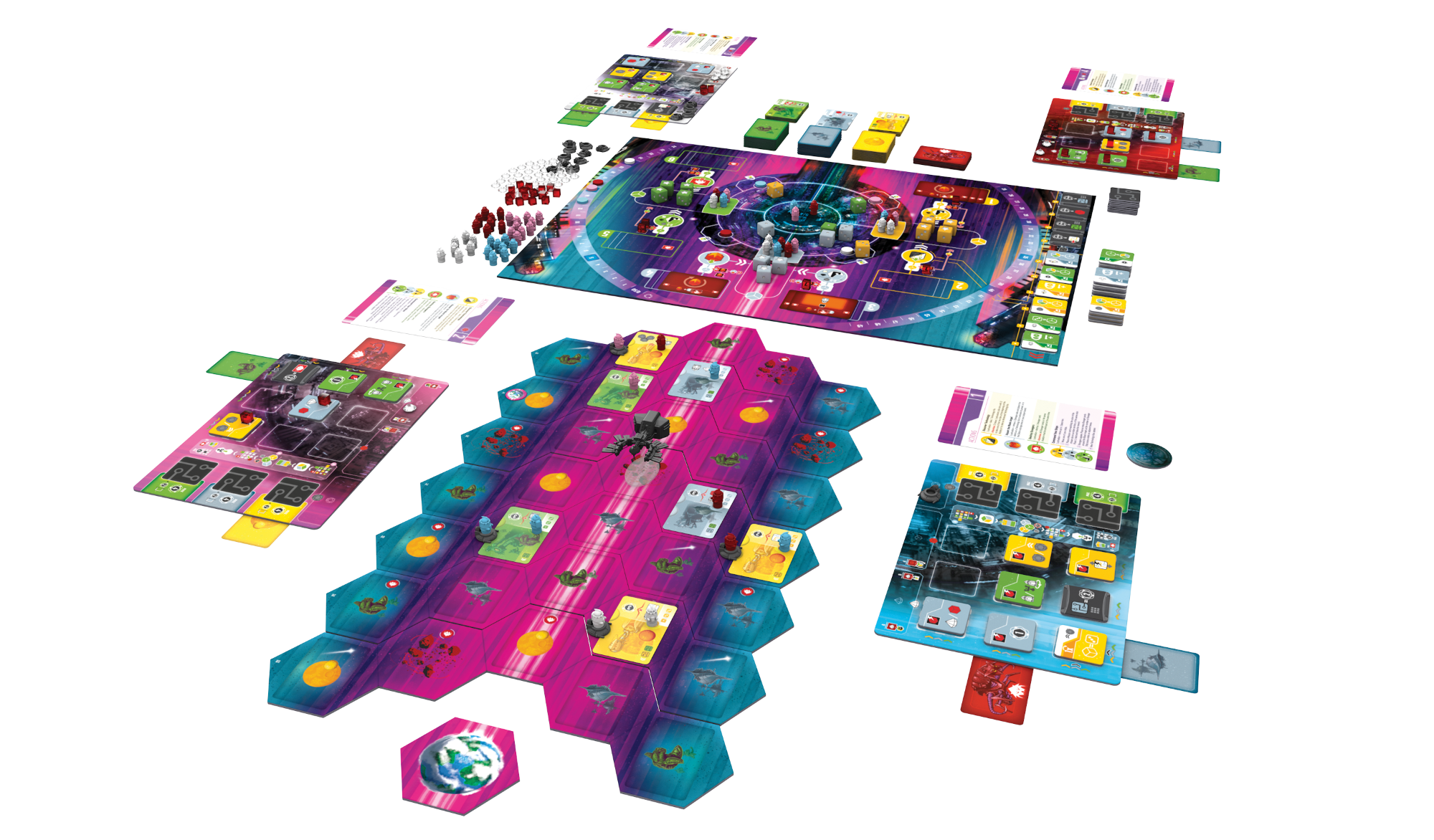 To start playing, you set up the Black Angel ship, placing robots and dice on board the ship as well as a bit of damage that the ship has already sustained. You also set up a space board consisting of various planets you can encounter along the way. Each player gets their own player board with some starting technologies as well as resources based on player order with later players getting additional bonuses for going later. There is a lot that you can do on your turn, but simply put, you choose a sequence of actions (A or B) and follow the sequence for your turn. Most of the time you'll be using Sequence A where you 1) can optionally play one of the cards from your hand to your player board to activate technologies you have; 2) choose a die and follow the actions for that die, either on the Black Angel board or on an alien planet; 3) draw a card matching the color of the chosen die and return the die to the supply. Sequence B is the refresh sequence where you 1) roll new dice from the supply; 2) reset your player board; 3) move the Black Angel closer to its destination. While the game has a lot you can do, these are the basic sequences you use on your turn. I'll go a bit more in depth into what those all mean, but if you don't want to go more in depth about what you do on a turn, you can more onto the next paragraph. Technology you can activate by playing a card includes getting victory points, getting new robots, moving those robots in space, and collecting more resources. Each person has a pool of dice that they can use for free, but you can also pay a resource to a player to use one of their dice. Actions you can use dice for on the Black Angel board include moving your ships through space to explore new worlds, repairing the Black Angel, destroying Ravager threats to the Black Angel and discovering new technology tiles. You can also select a die to activate a card from an alien world which will get you victory points and/or resources. There are three colors of dice, technology and cards, representing the three alien races. When you play a card, you activate the technology of the same color in the row or column you played the card. Similarly, when you move your ship through space and land on a planet without a card, you can play a card matching the race of the aliens inhabiting the planet. When you play a card, you place a robot onto it to claim it as your own, earning a reward. You then attract Ravagers to the Black Angel, based on the surrounding hexes, which will damage the Black Angel and provide an effect when activating parts of the ship. You then add new technology tiles to the display. During sequence B you will lose all the dice you had in your pool, then roll one die from the supply into your pool for each robot you have at a workstation. You also remove all cards from your player board so you can activate rows and columns again. The Black Angel also moves one space closer to the destination planet, altering the space board each time it moves.

Various actions along the way provide you victory points, but you'll also earn bonus points at the end of the game. Once the Black Angel gets to its destination or the Ravager deck runs out of cards, you have one more round of play before the end. Each person will get bonuses for the Advanced Technology tiles they have and for some of their remaining resources (converted two resources of a like type into a single victory point). Whoever has the most victory points is the winner.
Black Angel, in addition to having its regular gameplay for 2-4 players, also has a solo mode where you play against an adversary AI, Hal, with its own rules. After you take your turn, you'll flip over a card from Hal's deck. Depending on whether you took sequence A or B, Hal will attempt different actions. All resources Hal gains throughout the game turn into victory points. While not the most robust solo variant to a game, it offers you a challenging play experience where you'll often feel pretty far behind as Hal will earn multiple victory points most turns.

I'm often not too big a fan of dice in games, as the randomness can often be very awkward to play around. When you're unable to take actions because you didn't roll high enough, it can be frustrating. There are some games though where the randomness of dice is mitigated by the gameplay and Black Angel does this well. First, the dice are abnormal, having 0, 1, 1, 2, 3, 3 on their faces instead of the typical 1-6. That helps to make the highest number you can roll not so far removed from the lowest. Beyond that, you can spend a resource to flip a die to its opposite side (0->2, 1->3) to get a higher number. The color of the die is also arguably more important, as repairing the Black Angel, removing Ravager cards and discovering Technology tiles all require a specific color of die to use them, as does activating an alien world card. Because of this, the dice feel like a balanced part of gameplay instead of an agent of chaos. I also appreciate that Black Angel is basically a worker placement game, where instead of the spaces to take actions having limited spaces, the workers (the dice) are the limited part, so that blocking somebody is taking the color of die instead of removing that spot from being used later. I am personally not a fan of cooperative games, but Black Angel does cooperation well. While it is a competitive game, repairing the Black Angel is everybody's responsibility. The damage to the Black Angel and the Ravager cards make taking actions more difficult for everybody, so removing them is in everybody's best interest. They are also really useful actions to take, as you get the damage and cards as resources to utilize later, so while cooperating is part of the game, it is not something that can be dictated by somebody as the thing to do on a turn. My main issue with the game is that because it has so many actions available, it can be trickier to keep track of everything happening in the game; you can often find yourself overwhelmed in the beginning as you try to figure out why you would take certain actions. But because of the wealth of options, once you get an understanding of what's going on, taking an action can feel really rewarding as you can often do multiple different things on a single turn and feel really clever for working out a good sequence of events. As a solo game, I feel it works pretty well. While Hal is an impressive opponent because of all the victory points it earns along the way, I think it balances out fairly well, as you can set up lots of powerful effects for the end of the game and Hal won't have end of game bonuses. You do get a good feel for the game by playing Hal, although certain actions that human players make will play out fairly differently in a 2-4 person game. All in all, I think Black Angel is a really fun game with a good amount of depth that will probably require one or two playthroughs to get the full idea of why you're taking the actions you're taking. It has a somewhat more hefty price, but has a lot of components and a lot of fun that make it worthwhile.