Broadsides is a two-player game by Z-Man Games, and is set in the world of Merchants and Marauders (though the two share no gameplay mechanic similarities). You and your opponent will each be controlling a grand pirate ship, complete with massive sails, a shady crew, and, most importantly, CANNONS! Broadsides sets you up from the beginning running alongside your enemy’s ship, so there is no need for positioning yourself on the high seas.

On your turn, you will perform two of the available six actions, one of which must be the “Aim” action, and then you’ll choose whether or not to fire your cannons. At the end of each turn you’ll also “Zero In,” which allows you to reposition your cannons, training them onto a new (or the same) target for the next turn. The various actions available allow you to increase the likelihood of hitting your target, draw more cards, repair damaged portions of your ship, or pull off big, swingy attacks against your (un?)suspecting opponent.

The actual mechanics of your actions rely on the individual poker decks each player utilizes. You’ll normally have a hand of between two and five cards, and the cards in your deck are numbered one through ten with a couple wilds thrown in to help you out in a pinch. In order to reload your cannons, for example, you need to discard a pair, or for an evade, you’ll discard a straight. For the big blow-out Broadside! attack, you’ll need a flush.

As you land hits against your opponent’s ship, their player mat will slowly lose more and more material, and this will negatively affect the various actions they might take. While you will win the game by destroying ten or more planks of wood, it may be more advantageous to target their deck or sails early on in the game. If they lose enough crew, you’ll unveil the icons on their player board that diminishes their maximum hand size, or provides a number of “-1” results to their attacks, eventually revealing the “no-firing” symbol which completely disables one of their two cannon slots!

The game has a pretty decent back-and-forth tension to it. When my spouse’s first salvo eliminated my First Mate on the first turn, it certainly modified the choices I thought I had already decided on. That first turn also perfectly exemplified the brutality in setting the pace of play, and also how swingy the game can be! My opponent had drawn the perfect starting hand, and without having a straight available in my hand I was at her mercy. While this can definitely be a frustrating aspect of the game, it can certainly be mitigated with some clever choice-making and aggressive counter-blows.

The decision space in this game is perhaps not as robust as other modern games coming out of our catalogue, but it does make for some interesting all-or-nothing strategies. If you’re looking for a fast and furious two player game for fans of the theme, this is certainly a game worth checking out.

Merchants & Marauders: Broadsides is available now from our webstore. 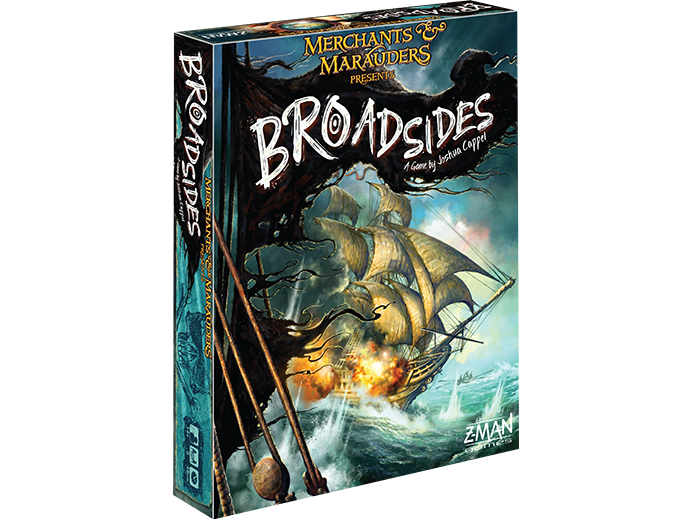