Circadians: First Light is a 1-4 person worker placement game from Garphill Games through Renegade Game Studios where you are attempting to earn favor with the residents of the planet Ryh. In it, you will be using the dice you roll to take different actions in order to get the resources you need to earn victory points.

Each round in Circadians starts with the Plan Phase where a new Event card is flipped over and provides a positive or negative effect for the round. Then each player will roll their dice behind their player boards and secretly assign them to their garages where they will later be actioned to different locations or to farms where they will provide resources during the Harvest Phase. The next phase after the Plan Phase is the Execute Phase where each player reveals their dice and takes turns actioning the dice from garages to different locations. Each location does different things, such as the Foundry gaining you new upgrades to your garage, the Control Room allowing you to move your Harvester on the Planet Board or the Headquarters where you lock the die you action there to be actioned first on the next turn. There are also the Negotiation Board and Depository where you action dice to earn victory points, keeping the dice there until the end of the game. After the Execute Phase is the Harvest Phase. During the Harvest Phase, each player gains resources from the location of their Harvester on the Planet Board as well as from their farms. Then, you have the Rest Phase, where you return dice from the location boards and farms and you rotate who the first player is. After 8 rounds, you add up points to determine who is the winner, with points being earned from dice actioned to the Negotiation Board, Item Cards that were acquired, how much the Research Base was upgraded, the value of the Gem Cache a player's Harvester is on (if on a Gem Cache) and any extra Gems.

Circadians has a solo mode that can also act as an alternate game mode for 2 or 3 players where you play against an AI. Each Player Board has a back side that has a different AI to play against, although the difference between them is just how they earn points at the end of the game. The AI will take actions at random from a deck of scheme cards before the player(s) get to action dice from their garages, having costs and rewards indicated by the scheme card instead of the locations the dice get actioned to. The Harvester will also move in the direction of the die value the first scheme card shows, traveling along the Planet Board until it hits a Gem or the edge of the board. The AI will also earn Gems and/or dice at the end of the round depending on how many dice it has on its AI Board. At the end of the game, the AI adds up points based off of its difficulty and you see who wins, counting the AI as another player in checking point value.

I like Circadians as a worker placement game that gives you a lot of different options. One neat thing is that the Depository/Headquarters board, Negotiation Board and Location Boards are each double sided with the sides being different depending on the player count. This means that a 4 player game will still have open spaces for players to action dice to when a 4th player is placing their last die, but a 2 player game won't feel like there are too many spaces available. I also find the victory points interesting, as I've spent the first 6 to 7 rounds upgrading my engine for earning resources (which incidentally got me some points) and then the last couple of rounds earning the majority of my points. Circadians is a bit heavier than a lot of the games I play and while not overly complicated, can be a bit overwhelming with all of the choices on offer.

And while this isn't related to gameplay, I do love the components and insert. You go through a lot of resources during the game with some actions costing 10+ resources of a single type while you're able to gain back large quantities of resources the more you progress. With 190 wooden tokens, spending and gaining resources feels pretty good. The insert is a bonus as well as it fits all the small components (like resources, dice and tiles) and allows the larger components (like Player Boards, Planet Board and Location Boards) to sit on top, keeping the smaller components in place well. While more of a bonus and not important to the actual playing of the game, it's nice to be able to fit everything into the box well and have them stay in place. After buying various games from other companies where the insert is just a flat piece of cardboard, it's nice to have an insert that has places for each of the components. If you want to sleeve the game and use the insert, I would recommend thinner sleeves as there isn't a lot of extra space in the insert. 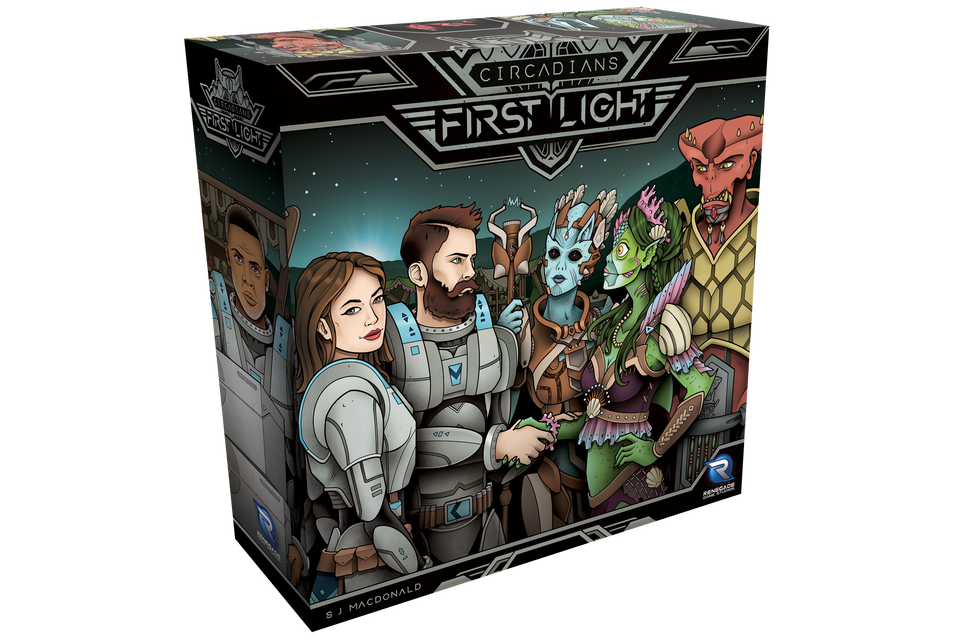