“Once Coyote lost all his belongings, while crossing the river with his friends. He became very sad … and also jealous. So Coyote challenged the others to win their possessions and they agreed. Being a trickster, he invented a bluffing game, in which everyone had to lie, as nobody would know the truth. Rumor has it the game was quite similar to this one!”

Coyote is a simple and hilarious bluffing game where you don’t know your own card, and must either deduce the value to bid on what the total is among all the cards in play or bluff your way to a win. With the cards values being -10, -5, 0 through 10, 15, 20, and two special cards to alter available information, players will find themselves bluffing without even knowing it.

In Coyote, each player will be dealt one card that they must face away from themselves and never peek at. One more card is placed facedown in the center of the table and players may peak at it on their turn if they have the ability available to them. Starting with the youngest player, players will take turns bidding a number that they believe to be the lower or equal to the total value among all the cards in play. If a player believes the previous bid is higher than the total, they may challenge the bid. A challenge is won by catching a player who has bid too high and lost if the bid was lower than the total value, the winner gains a chance to peak at the center cards in later rounds while the loser will lose one of their three lives. Once you are out of lives, you are eliminated and play proceeds until there is only one player left.

When I picked up Coyote, I expected it to be a small and entertaining game that I would bring out maybe once a month to play. I was pleasantly surprised to find that I am craving more games of Coyote even as I am writing this review, even my friends who openly dislike bluffing are into Coyote. It is a smooth game that rewards logical thinking and good bluffing skills, but throws in enough chaos with its varied card values to keep even the most quick witted of players on their toes. The incredible art from Zona Evon Shroyer (Yupik Alaskan Native) and special metallic print in copper on the cards further enhances the story of the game, truly making Coyote a game that I will be taking with me for all game nights.

Coyote is available now from our webstore. 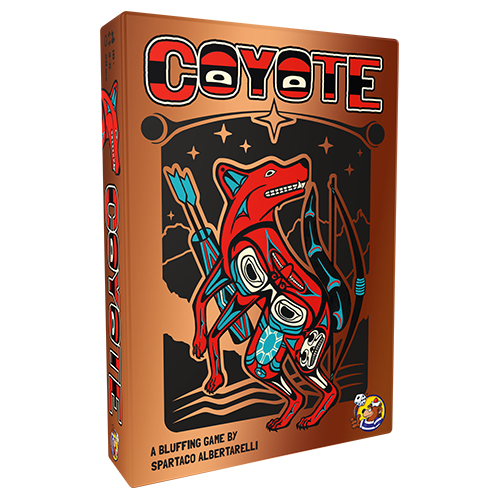