The trucks are waiting at the factory, and you better load them up as fast as you can! The receiving dock is also starting to back up, so build out your conveyor pipelines to unload those other trucks, and fast! What are you loading and unloading? Why are you and the other factory exchanging strikingly similar products? Who even are you and what are your qualifications here? None of this is pertinent, and asking questions is only slowing you down!

Curious Cargo, a 2020 release from publisher Capstone Games, really embraces the hard edge of the narrative relevance in gameplay in a light-hearted fashion, and the humor is appreciated! Designer Ryan Courtney has laid out a clever puzzle and a quirky economy for us to explore, so let’s take a look.

Rounds of Curious Cargo are split into two distinct phases. In the first phase, the Construction Phase, you’ll be drawing tiles and/or placing tiles from your inventory onto the board. Each rectangular tile depicts pipe connections in a myriad different angles and combinations. Each player is attempting to place tiles in such a way that the pipes connect an engine to an output at the left-hand edge of the board where trucks will arrive. Simultaneously you will want to build out your factory floor so that pipes ALSO connect to the right-hand edge where, after trucks leave your opponents loading zones, they will arrive at your factory! You’ll be sending out far more than you can collect, but those few you can extract from rival trucks will be worth a lot of points.

The second phase of the game is the Trucking Phase, and this is where players will draw and play truck cards. Trucks range in size from two squares up to six squares, and they only move when pushed by another incoming truck. Players can play trucks to either players’ boards to allow a degree of disruption or hurrying your opponents’ trucks along. After all the new trucks have arrived, engines will engage and players can load up trucks on their left and receive product from trucks on their right.

Players can also earn bonus tokens from placing tiles in particular spaces on their board, or progressing up a Turn Order Track, which tracks the number of connections you have completed. There are three different tokens:

Construction Tokens (Gears) - These can be discarded to allow you two additional actions for drawing and placing tiles.

Trucking Tokens (Truck Discs) - This token allows you to draw two Truck cards, and then you must play at least one.

Splitter - These tokens can be placed on your factory floor to allow one connection to become many! You also have to discard a Construction Token to play it.

Curious Cargo is not about building perfect, clean, static connections from engine to output/input. If you can do that, I am impressed! Far more likely, though, it is about scrambling to forge connections where you can make them make sense, frequently by interrupting some pipelines to serve a more convenient point somewhere else. It’s a chaotic mess of lines, more closely resembling that rat’s nest of tech cords in that drawer you try not to think about than an orderly network of piping.

Due to the nature of randomly drawing tiles, you really have to make the most of the hand you’re dealt. You can spend resources to try to keep drawing tiles, but honestly it can be an effort in futility if you’re looking for one particular configuration. I have had entire games where I am just looking for *this* tile, but inverted, and it just doesn’t come up. If you have to lay down three tiles and make an awkward loop around itself to make that pipe connect to the output, then you might as well.

Another challenge in this game is the management of spare tiles. If you draw more tiles than you can play in a turn (Draw 2, Play 1, for instance), leftovers go into your storage which takes the form of two side-by-side stacks. During your turn you can play tiles from the top of the stack as if they were in your hand. During the Trucking Phase, you can discard two tiles to draw a Truck card. However, you have to choose two on top, either one from each stack or two from one. There have been times when I’ve had to discard a good tile I wanted to use because there was no good configuration for how to save them all.

All that to say this game is filled to the brim with difficult decisions. I would say a majority of this game is spent debating with yourself. I absolutely love this game for that reason. It can be a real challenge, and even be genuinely frustrating at times. All of that is worth it when you can get your factory running and you’re pumping out the product and snatching items off those incoming trucks!

I haven’t even been able to discuss the multi-layer scoring system, but I will leave that for you to discover on your own. I will settle for saying that it is really fun, and that I’ve seen scores across the spectrum from a blow-out to a few points difference. Check it out for yourself and let me know what you think!

Curious Cargo is available now from our webstore. 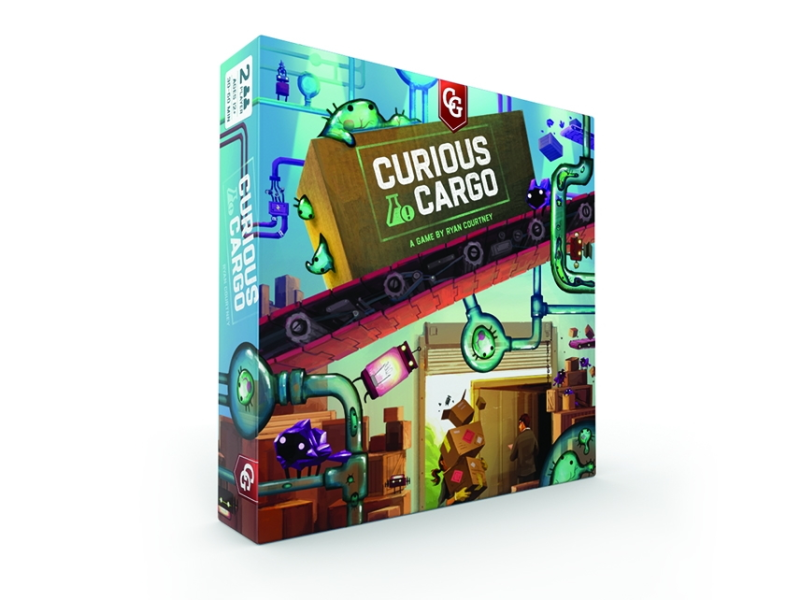