Doppelt So Clever (Twice As Clever in English) is a roll & write game published in the US by Stronghold Games. In it, you utilize dice you roll as well as the dice other people roll in order to fill up a sheet as best you can so you can earn more points than everybody else.
Each person starts the game with a sheet and pen. On a person's turn that person will roll all the dice and choose one to keep and mark his or her sheet. Any dice with a lower value than the chosen die get placed on the silver platter for later and then the person rerolls all the other dice. Again, the person will keep one die, mark his or her sheet, place lower value dice on the platter, then reroll. After keeping a third die and marking his or her sheet, all the remaining dice go to the platter and everybody else then gets to pick one of the dice on the platter to mark on their sheets. When marking your sheet, you need to keep in mind how each color area scores. In the silver and yellow areas, you mark different spaces in a grid and earn rewards for horizontal and vertical lines. In the blue, green and pink areas, you mark spaces one at a time with placement restrictions in the blue area and limiting factors to scoring the green and pink areas.
What makes Doppelt So Clever a fun game is that it remains simple to understand and play while being engaging and offering a good amount of choice throughout. Like most roll & write games with dice, there of course exists the threat of one player rolling better than the others, but it is mitigated in Doppelt So Clever by having different ways to score from the various areas and offering rerolls, returns and extra dice along the way. I recommend Doppelt So Clever for people who are looking for a reasonably small and simple game that challenges you each time by having to utilize your dice as best you can.
Okay, so Doppelt So Clever has the same basic principles as its predecessor Ganz Schön Clever (hence the mostly duplicate review). It differs from the original though by offering up a different scoresheet with each area playing out differently from each of the sections in the original. It also adds a new action you can take, being able to take back one of the silver platter dice for the next roll. If you enjoy Ganz Schön Clever, its successor is a fun addition to your collection as it will have a familiar playstyle, but different sheet. It's not quite an expansion, but feels a bit like one in that the gameplay stays with new content. If you haven't played Ganz Schön Clever, Doppelt is still fun on its own, being a solid roll & write game by itself.
-Alapai 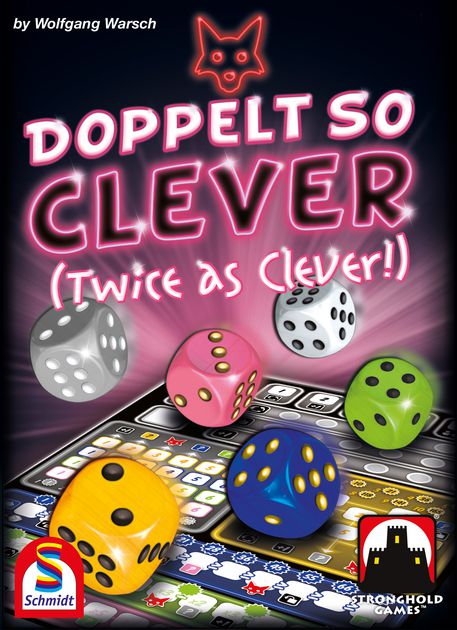