‘Arrakis ... Dune ... wasteland of the Empire, and the most valuable planet in the universe. Because it is here—and only here—where spice is found. The spice. Without it there is no commerce in the Empire, there is no civilization. Arrakis ... Dune ... home of the spice, greatest of treasure in the universe. And he who controls it, controls our destiny.’

Dune: Imperium takes us to Arrakis as one of the leaders of the Great Houses of the Landsraad in a conflict to bring victory to your house and gain control of Arrakis. To do so, you will marshal troops to your forces and send out agents in a deck building and worker placement hybrid game.

Each player will begin the game with a unique leader card, a deck of action cards, and two spies. As with almost all deck builders, players draw 5 cards to form their hand each round and being the Player Turn phase. Players will take turns assigning their agents by playing a card and placing their agent in a space matching the card’s iconography. When placed, an agent will gain you benefits of their location. Locations can either gain you resources, victory points, or further your influence with one of the factions of Dune.

When a player has run out of agents or if they choose to, they will take a reveal turn. When they do so, they will reveal their hand and use the resources at the bottom of their cards to buy new cards from the marketplace or add to their power in the conflict. When a player takes a reveal turn, they will skip their turns until the Combat Phase. Plot Intrigue cards, that will be gained from some locations on the board, can also be played during an agent placement or when you reveal your cards.

Once all players have finished playing their agents and have taken a reveal turn, the combat phase begins. Any player who has at least one troop in the current conflict may either play a Combat Intrigue card or pass. In the combat phase, passing does not end your combat phase and you’ll be able to play a card when your turn order comes up again. Once all players have passed consecutively, the combat resolution will happen. The player with the highest strength, based on troops at the conflict and cards played, wins and rewards are awarded to players based on their placements from 1st to 3rd place. In case of ties, players will share a lower placed reward and in two and three player games, the 3rd place reward is not awarded.

When the combat phase is resolved, the Maker phase occurs. For any locations with the Maker icon on them and no player’s agents have been assigned to them, place 1 spice token to the location as bonus spice for future turns.

Lastly, the Recall phase begins. If any player has reached 10 victory points or if the conflict deck is empty, the Endgame is triggered. Otherwise, players will recall their agents from the locations and play continues by returning to the Player Turn phase.

At Endgame, players may play and resolve any Endgame Intrigue cards that have to score additional victory points to help them gain more points if they meet any of the conditions on the cards. Once all players pass on playing anymore Endgame Intrigue cards, the player with the highest score will gain control of Arrakis and The Spice.

And that is Dune: Imperium in a nutshell. There is much more to the game, but if I were to go further into the game, it would just be me rewriting all the rules at that point.

Dune: Imperium is an interesting game, it combines elements of many games and mashes them all up to make a strategic game that offers a huge emphasis on action prioritization and bluffing. Your hand of cards acting as both your workers, which can gain you Intrigue cards and benefits to help your house gain victory, and resources, for buying new cards to add into your deck or added strength to the conflict, creates some unique strategic scenarios of bluffing and sometimes influencing you to let players use cards to gain control of certain locations so they can’t use those cards in the reveal turn. And other times, you might want to skip your agent placements all together to prioritize getting new cards before anyone else.

For those reasons, Dune: Imperium is a great game, but it is not for everyone. If you have enjoyed games like Terraforming Mars or just love the Dune franchise and are looking for a game with some meat to the gameplay, I highly recommend checking out Dune: Imperium.

Dune: Imperium is available now from our webstore. 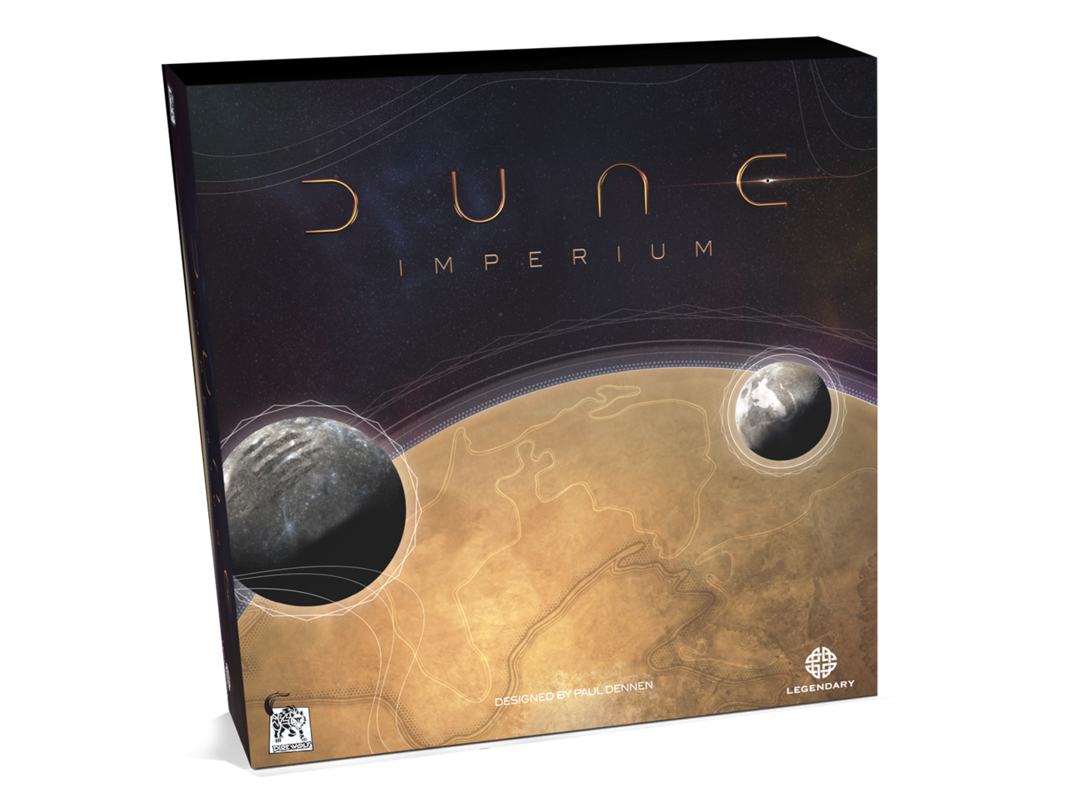