Everdell is a very robust Worker-Placement game from Starling Games. You build up your settlement with constructions and critters over the course of a year's seasons. These cards of Critters and Contractions along with placements done during the game's final season will give you the points for scoring.

On your turn you can do three different things: place a Worker, play a card, and prepare for season. Placing a worker typically will net you a small amount of resources and perhaps a card, in the final season it is useful to place some workers in slots that give you end of game scoring points. In addition to the worker placement locations available in every game, there will be four additional ones randomized and added to the board each game, changing what the optimal placement strategy in the early game is each time you play. The resources obtained are amber, wood, pebbles, and berries, the first three are typically used to play constructions and berries are used to play critters. Cards card be played either from your hand or from the meadow, eight face up communal cards all players have access to, after paying the cost of a construction or critter it is added to your tableau which has a total of fifteen slots. Critters will have constructions that they belong to allowing you to play one of that particular critter for free if you have that construction in play. The final action is to prepare for season this will return all your workers to your supply to use again and giving you access to more of your workers, activate certain cards the first and third times you do it, and the second time you prepare for season you'll be able to claim two of the cards in the meadow into your hand for yourself. After your third preparation, you'll take actions until you have no more to take. Once everyone is out of actions you'll count points.

Everdell is a very strong tableau builder with a strong variety of strategies and enough variation to keep things interesting and fresh, while it is a litter gaudy, the tree assembled to put on the game board does have fine table presence. The cards do not feel like they have blue core, and I would recommend sleeving the 128 standard size cards so that they can be safely mashed. Other than that it has very excellent components, strong gameplay, and good artwork. If you're looking for a worker placement or tableau building game to add to your collection, Everdell would be a very strong pick indeed.

Everdell is available now from our webstore. 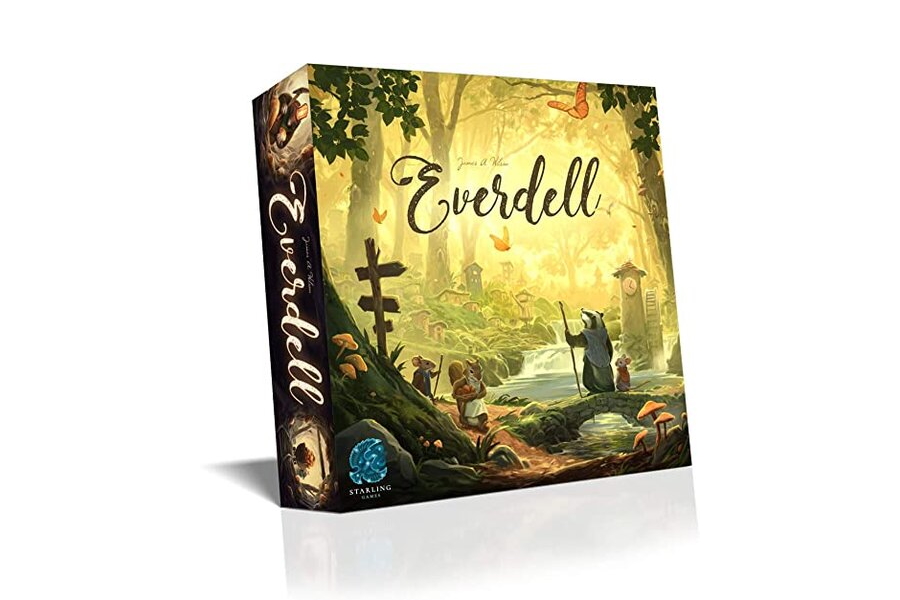