Excavation Earth is a 1-4 player game where you play an alien race, excavating the remains of Earth for the artifacts left behind. In it, you will travel the planet, excavating, surveying, smuggling and selling artifacts trying to be the race with the most credits at the end of the game.

Excavation Earth also has a solo mode where you play against a faction that has its own cards to take actions with. The Zu faction doesn't use the Travel action as it doesn't have explorers, the Smuggle action as it adds a Smuggle alternate option into Excavate or the Pass action as it just keeps flipping cards until its deck of cards for the round is empty. It has an alternate action, Snipe, which sells a single artifact like with the Sell action, but does not require a trader at a market to sell the artifact. Each turn, the Zu take two actions by flipping two cards from its deck. Where you have to have explorers in various locations to take actions, the Zu automatically assumes it is everywhere, allowing the Zu to Excavate from any region or Market from any location.

Excavation Earth is a complex game. Even its set-up takes a while as, among other things, you have to place artifact tiles for each of the 5 regions separately as well as making a black market and set up the 50/51/57 pawns (for 2, 3 or 4 people) neatly in rows on the buyer board before adding three buyers to each market, doing it randomly, but in an order determined by cards from the buyer deck. It gets even more complex once you start playing, as a lot of the actions have many different steps and require taking actions to set up. For example, to use the Sell action as efficiently as possible, you need to collect 3 artifacts of the same color, put traders at 3 different markets, have buyers for that color at those markets and then you want to make it so that as many buyers of that color are off the buyer board as possible, so that it will be the most valuable buyer. That will probably require moving explorers around to dig sites or black market sites, using the Excavate, Smuggle and/or Survey actions to obtain artifacts, using the Market and/or Command action to place traders and set up buyers, and then you can finally use the Sell action to earn a lot of credits. 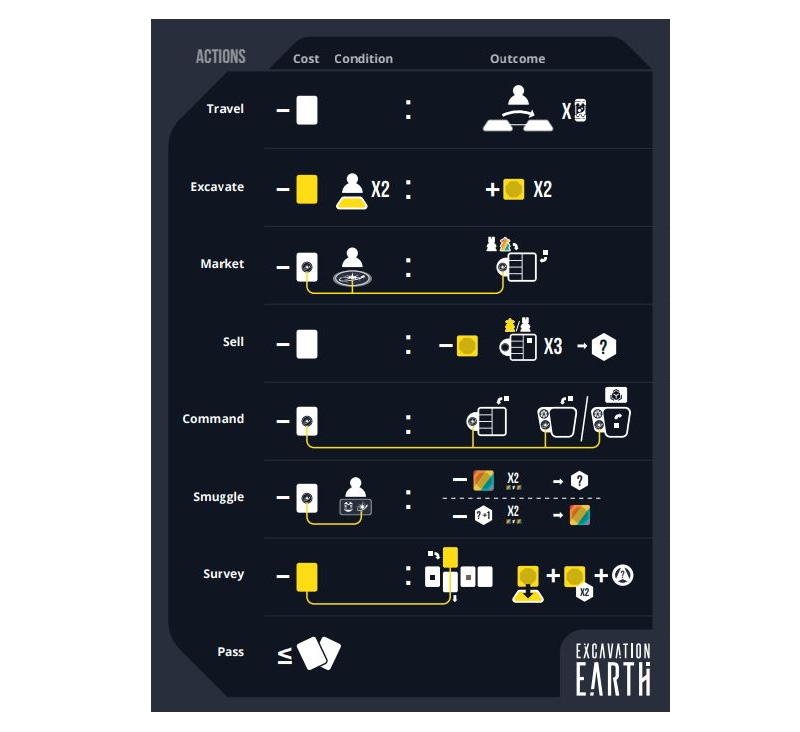 It is a game that I recommend setting aside a good amount of time for the first time so that you not only have a good amount of time to set up, but also so that after you've played through a round, you can reset so that you can start playing now that everybody knows what they're doing more. It is an interesting game that has a lot of decision space for your turn. Not only do you have to decide which two actions (or single action twice) you want to use and what you want to do with those actions, but which card you discard for those actions is also important, as you have to keep in mind the region and market on any given card. Ultimately, I will say that because you have to put so much effort into putting all the pieces together for your turn, the payoff when you are able to sell for a large profit feels amazing. Because of the work, you feel like the credits are the result of hard work and smart thinking. So if you feel like a game where you have to balance a lot of different decisions all at the same time, Excavation Earth is a great way to scratch that itch. As for the solo mode, I do think that the game does a decent job at making the Zu a challenge, but because you draw a random card to determine what they do, it can be difficult to play around them as you never know what type of action they're going to take. Are they just going to Command and get more traders and envoys or are they going to Sell and throw out all your hard work setting up markets? At the very least, I wouldn't recommend getting the game just for the solo mode. I'd recommend getting the game and playing a few times with friends and then you can see if you like the Zu as an alternate challenge.

Excavation Earth is available now from our webstore. 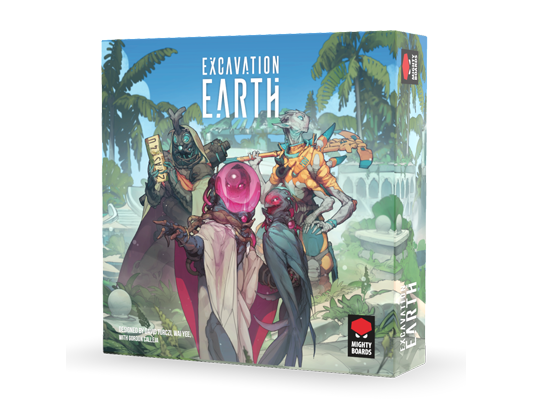