Flamme Rouge is a tactical card-driven game of bicycle racing. Each of up to four players (or six with the Peloton expansion) control two distinct racers in your goal to get one of them in first place. The card driven action in the game is made with two choices at the start of a series of selection, execution and cleanup. In the Energy Phase you will for each of your riders, one at a time, you will draw four cards and secretly select one of them to choose how many spaces forward they will attempt to move. Each of your two riders a Sprinteur and a Rouleur will have different decks of Fifteen cards, the Rouleur (an all round good cyclist) will have an energy deck with three copies each with speeds Three through Seven, while the Sprinteur (a specialist of explosive finishes in tracks that are flat before the finish line) will have three copies each Two through Five as well as speed Nine! After each player as made these two selections, next is the movement phase. All choices made are revealed and starting from the front each rider will move the number of spaces on their energy card, if the square where a rider would like to stop is fully occupied then the rider simply stops sooner. Then in the end phase three things happen. First the cards used in this turn will all be removed from the game. Second, starting from the back, packs of riders (groups of pieces with no empty squares between them) will get to slipstream forwards one square if and only if there is exactly one square between them and the next pack, joining packs together. Finally, an exhaustion cards (speed Two energy card) will be added to the deck of each rider with an empty square in front of them.
With snappy and accessible gameplay, Flamme Rouge is a treat to play that rewards good selections and anticipation of what your foes may do, great for families and enthusiasts alike!
-Izaac 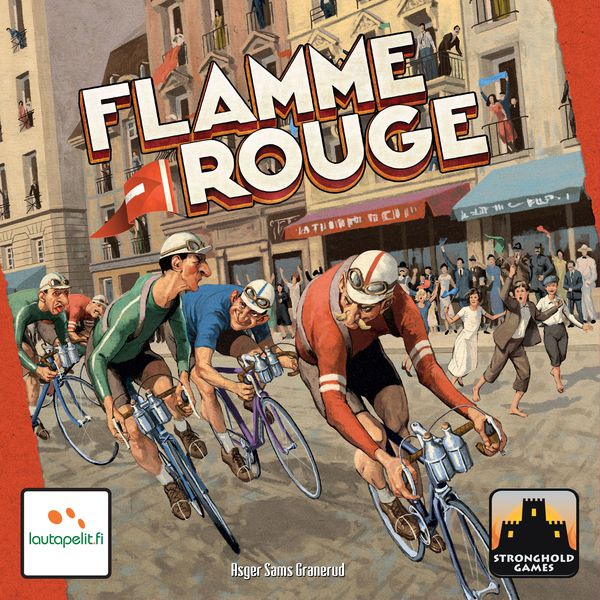