If there is one thing a board game can do to get me really excited to play, it is to sell me on the theme, and Fort is a game that does that very well. Leder Games has brought artist Kyle Ferrin back for Fort, continuing the playful art style used in Root, which lends itself well to this deck building game about - you guessed it - building a fort with all your best friends!

Fort is a two to four player game in which players will compete with one another to build up their Fort the fastest, and end the game with more Victory Points than anyone else. The cards players will be drafting represent the various neighborhood kids who want to spend time with you, and the two resources in the game you’ll be spending on fort upgrades are Toys and Pizza! So thematic, so cute. On top of this, the kid cards have appropriate suits to match - Squirtgun, Skateboard, Shovel, Glue, Crown, Book, and Coin (which is wild).

Each turn, a player will choose one card to play from their hand of five, and then resolve one or both of their abilities. The first ability listed at the top of each card is the Public Action, and the second ability under it is known as the Private Action. As you might infer from the name, the Public Action can be taken by anyone around the table as long as they discard a card from their own hand matching the suit. The second ability is the Private Action, which only the active player has access to.

The cards all do a bunch of different things, including basic things like collecting resources or upgrading your Fort Level, to things like destroying your own cards, or recruiting extra friends. All the actions are represented by icons, and the player aids parse out exactly what those icons mean.

A player triggers the end of the game by upgrading their Fort to Level 5, by reaching 25 Victory Points, or if the deck runs out when refilling the publicly available “Park.” Players then score their Victory Points from House Rule cards and their Fort Level, and whichever player has the most points wins.

My wife and I very much enjoy deck builders, getting plenty of enjoyment from the chain combos from games like DC Deck Builder and Star Realms. Fort, however, doesn’t combo in the same way. Just like in Dominion, you will only be playing one card per turn for abilities, recruiting one card from those available to add to your deck, and then passing to the next player. A lot of the cards you play have abilities that are multipliers, which will allow you to discard cards from your hand matching the suit to boost the benefit. It is a different kind of hand and deck management, as you’ll be building a deck not necessarily to combo together powerful big turns, but to more narrowly focus on one or two suits in order to get the most out of the one or two actions you’ll take each turn.

After resolving the desired effects and playing any additional cards to boost the action(s), any cards remaining in your hand will go to your “Yard,” which makes them available to other players when recruiting new cards to their deck on their turn! I really enjoy this aspect of the game. If you neglect playing with this friend, someone else might want to play with them more and take them to their fort! It forces some interesting decisions when you know what your opponents are playing towards and what you are or aren’t willing to sacrifice to keep your friends close.

This tension is probably what I enjoy most about this game. No card is safe, and when you’re choosing which friend to use each turn, you also have to be mindful of what action you’re making useable by everyone else at the table! I’ve definitely chosen a sub-optimal card on my turn just to deny allowing my wife to collect the last piece of pizza she needs for the next level of her fort!

Beyond this, there are also a couple other mechanics, like the Lookout, which allows you to permanently remove a card from your deck in order to benefit from their suit each turn, and your Pack, which lets you store more resources. These get integrated into various cards and multipliers, and overall the game really uses the design space of each mechanic well.

All this in a cute, small box with high quality components make this an easy game to recommend! There is enough variety in the deck of cards for a fair amount of replayability, and the different Perks and House Rules keep it interesting from game to game. On top of all this, the cards fit back into the organizer after sleeving, and that is the final cherry on top. Definitely check out Fort, and let me know what you think!

Fort is available now from our webstore 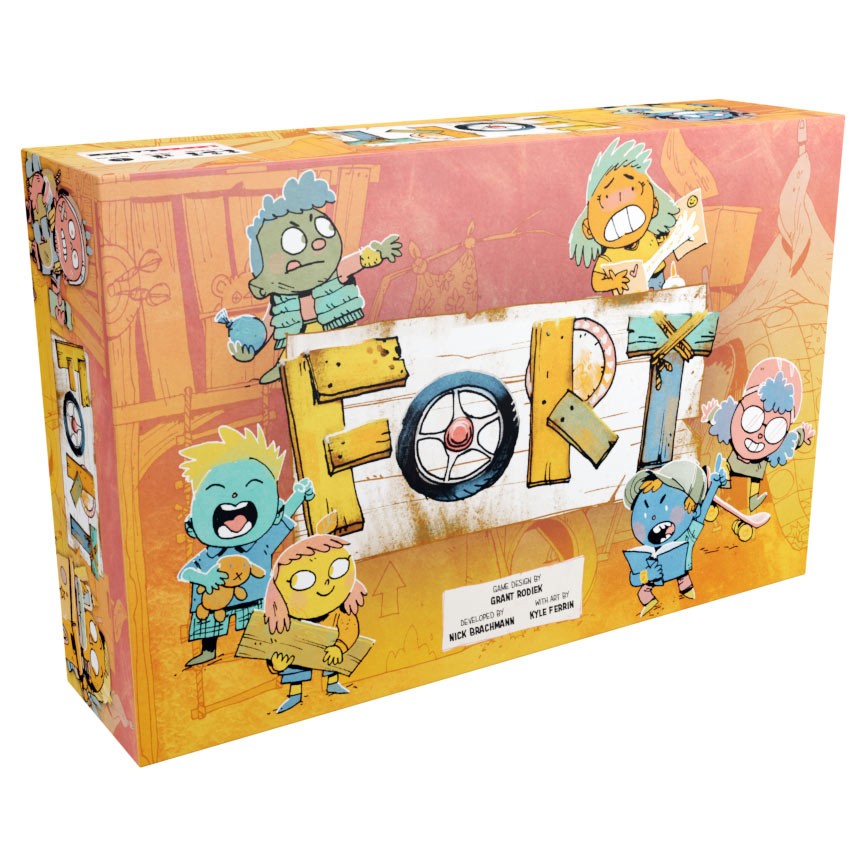