Are you looking for a new career? Seeking adventure in the stars? Then look no further than your closest Corporation Incorporated recruitment office!

Relive the classic game of space truckin’ from Vlaada Chvátil in Galaxy Trucker 2021 Edition. In Galaxy Trucker, you become a space trucker looking to earn a buck doing what you do best as a space trucker: driving a truck through space to deliver the precious plumbing parts of Corporation Incorporated. However, the dangers of space have caused previous shipments to be ransacked by pirates and lost in asteroid fields. To counteract this, Corporation Incorporated is now contracting you to build a space faring ship out of their sewer pipes and to safely navigate it through the dangers of space to its destination, but any damages that occur will be coming out of your pay!

Galaxy Trucker is played in two parts, the real-time constructions phase of your ships and the turn-based adventure phase. Starting with the construction phase, all of the ship components are laid face down in the center of the table for all players to be able to reach. Ship components are made up of rocket engines, lasers, shields, crew quarters, reactors, cargo pods, and connectors.

Lasers will destroy the threats of space before they can reach your ship, such as asteroids and pirates. But due to their static nature, their positioning of your ship will affect their effectiveness.

Shields will defend you from oncoming threats, but only in the direction that they are facing and each use must be powered by energy from the reactor.

Crew quarters will add more rooms for crew to help the ship function, and special crew quarters can house aliens that bring benefits to your ship.

Reactors supply you with energy to power up your shields and other special tiles for their effects.

Cargo pods are empty at the beginning, but with the derelict ships and undiscovered that you will encounter on your journey, you might be able to fill them up with precious materials to earn an extra buck at the end.

Once the players are ready, the phase begins in real-time with players taking ship components one at a time and deciding if they would like to add it to their ship. While holding a ship component, the player must decide to either add it to their ship, place it in their single save slot for later use, or return it to the center of the table face up to grab another ship component from there. As soon as one player is finished with their ship construction, they take the highest finish bonus token and flip a sand timer, locking in their ship’s design and giving the remaining players a time limit to finish. Subsequent players who finish take the next highest finish bonus token or if they fail to finish before time runs out, they will have to venture out into space with whatever ship they have constructed. Before heading to the adventure phase, a check of your ship’s legal connections must be made, afterall mistakes might have been made during the rush. Any illegal connections or parts of the ship that aren’t connected will fall off at launch and your adventure begins!

The adventure phase will have the player travel across the galaxy to deliver their ship to the destination planet as intact as possible, while possibly earning some extra income on the way. The player with the most rocket engines will be placed in the lead position, with everyone trailing behind based on how many rocket engines they have, and then they will set off to face the vastness of the galaxy. Encounter cards will be laid out for the players to encounter, each one representing either a threat to the player’s ship or an opportunity to get rich. The threats include space pirate attacks and asteroid fields that will cause damage to the player’s ship unless they are fended off with shields and lasers. Opportunities will come in the form of derelict ships and planets with resources that will reward players with new crew members or resources that can be sold for additional money, as long as they have the proper crew or cargo space for them. If any player loses all their crew members or rocket engines during this phase, they are out until the next round begins.

Once all the encounter cards are dealt with, it’s time to get paid. Players will be rewarded dollars for delivering their ship and any cargo they may have gathered, but penalized for any damages suffered during their trip. Three more rounds will get played with bigger ship blueprints and more encounters for the players to overcome. If any player ends the game with at least one dollar, they win. But the player with the most dollars at the end, wins even more.

Galaxy Trucker is the type of strategy game that I find to be delightful for all ages.The silly theme of delivering a ship made out of plumbing parts, the frantic gameplay of real-time ship construction keeps everyone involved, and the emotions you feel when either everything goes to plan for your ship or when everything crumbles apart due to one poor placement of a connector really make Galaxy Trucker a unique experience.

Galaxy Trucker is available now from our webstore. 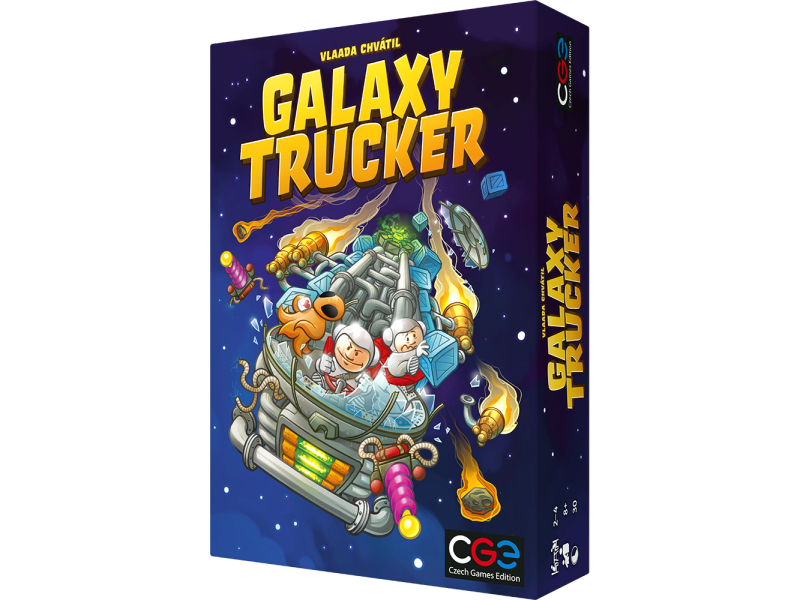