Good and Bad Ghosts is an abstract strategy game of hidden information. Played on a board six squares wide and six squares deep; each player has eight pieces, four good ghosts, and four bad ghosts. There are three ways to win: you can capture all four of your opponents good ghosts, you can have your opponents capture all four of your own bad ghosts, or  you can bring one of your good ghosts to one of your opponents corners and have it escape off the board.  Of course, your opponent doesn't know which of your ghosts are good and which are bad, and the mindgame therein is what gives this game its punch.
Deployed in two rows of four your setup for ghosts is where the game begins. The low complexity of choosing where your good ghosts will be and where the bad ones will be opens up the chance for reads. One of the most thrilling moments I've had in a game of Good and Bad Ghosts was to call out that an opponent's ghost that was in position to escape was actually a bad ghost, and once I had called their bluff it was easy to feed them my bad ghosts and win the game.
Good and Bad Ghosts is an excellent hidden information strategy game that makes for quick games with daring plays, and a welcom addition to your game library's two player section.

Good & Bad Ghosts is available now from our webstore. 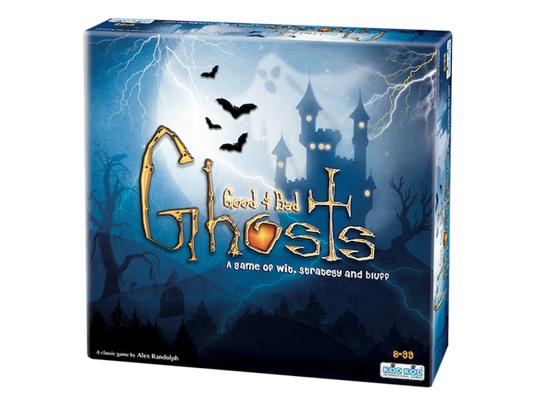