Legendary Encounters: Firefly is a 1-5 person deck-building game from Upper Deck where you play through the events of the Firefly TV show. Each game will have you play through 3 episodes with breaks in between, trying to complete the tasks in each episode before the Episode Deck runs out and you lose to an inevitable enemy.

Like the Legendary Marvel deck-building game that came out first, the Legendary Encounters games are deck-building games where you build a deck of cards as you go, recruiting more powerful cards into your deck and using those to defeat the enemies that show up throughout. With Firefly, you start by having each player pick a Main Character. If you have less than 5 players, you then pick more characters so that there are 5 total Main Characters. The other 4 are the Supporting Characters and you take their respective cards and shuffle them together to make the Crew Deck, putting the top 5 cards of the Crew Deck face up in the Bridge. Next, you choose three episodes to play from. Each episode is labeled A, B or C and you pick one of each to be the episodes you will be playing through. To build the Episode Deck, you take the episode's cards and add in Side Jobs (the number of which depends on the number of players) and then put one of the three Inevitable cards at the bottom of the Episode Deck. To play through a turn, you start with the Episode Phase, where you move the top card of the Episode Deck into the 'Verse. There are 5 spaces in the 'Verse for cards to be in and if there is already a card in the space a card is trying to move into, it pushes that card into the next space. Once a card goes past the last space, it goes into the Combat Zone, where it flips face-up if it wasn't already, and you have to deal with it there. Then, you move to the Action Phase, where you play and recruit cards. Each card will have different things it can do. Cards can give you Recruit Points or Attack, as well as have special abilities. They will also each have a Class Icon that determines what Class the card is. Certain cards will care about having played other cards before them, such as wanting you to play a card of the same Class in order to get an additional effect. You can use the Recruit Points you get during your turn to recruit character cards from the Bridge into your discard pile. You can use Attack to defeat enemies or to scan a space in the 'Verse, flipping the card there face up so you know what to expect. After the Action Phase is the Strike Phase where all the enemies in the Combat Zone attack you, dealing you cards from the Crew Strike deck that can either deal damage or hurt you in other ways. Finally, you get to the Cleanup Phase where you discard the rest of the cards in your hand, put the cards you played this turn into your discard pile and then draw back up to a hand of 6 cards. If at any point, you have to draw cards and there are no cards in your deck, you shuffle your discard pile together to make your new deck. Then, it moves to the next player's turn, where they go through all the same Phases. Each Episode has its own unique set of objectives, based on the events of the TV episode, that you have to complete to move to the next episode. You might also not complete the objectives at which point the Inevitable card at the bottom of the Episode Deck will show up in the Combat Zone. Once it has used its Strike ability against each player, you also move on to the next episode. In between each episode, you can use credits you earned in the episode you just played to help out the players. You can buy upgrades for the ship, repair the ship, heal the players or let each player draw additional cards for the next episode. If you make it through 3 episodes, you win. If you fail Mandatory Objectives from an Episode or all the players' Main Characters are defeated, then you lose.

I'm a big fan of deck-building games and Legendary in particular. When you fill up a 5000 count card box and still need more storage for your game, you're probably pretty into that game. While I am a bigger Marvel fan than I am a Firefly fan, I do enjoy Firefly a lot and was excited when it initially came out. Like the Firefly Board Game before it, Legendary Encounters: Firefly does a good job of capturing the feel of the series and incorporating it into the game. With each crewmember of the Serenity having their own deck that is unique to them and each episode having its own deck of enemies and events, there is a lot of flavor to go around. For example, in Shindig, you have to deal with Badger and his crew, but instead of just beating them up, you can bribe them with Recruit Points instead, since they are more interested in credits than going after you personally. You also have to deal with Atherton, who you can only deal with once he's attacked you, in order to represent him starting the fight with you.

Like the original Legendary before it, the game does suffer a bit from larger player counts making the game trickier. Since the Episode Deck goes every turn, a 1 player game will have you dealing a card into the Combat Zone on your sixth turn, while a 3 player game will have the third player dealing a card into the Combat Zone on their second turn. The advantage of more people in the game is having a wider range of characters available as each character has a unique helpful Talent as well as certain cards caring about specific characters (not just cards like Wash's Crazy Ivan requiring Kaylee being a Main Character to avoid a Ship Strike, but also cards like Patience's Sniper who gives an additional effect if defeated by Jayne). While the game tries to balance this by having preparation rounds for larger play counts and adding Side Jobs into the Episode Deck to slow the Inevitable card, things can still spiral out of control between your turns without you being able to do much of anything to stop it.
All things considered, I really enjoy the Firefly version of Legendary Encounters. It captures the feel of the Firefly series while being an excellent deck building game.
Legendary Encounters: Firefly is available now from our webstore. 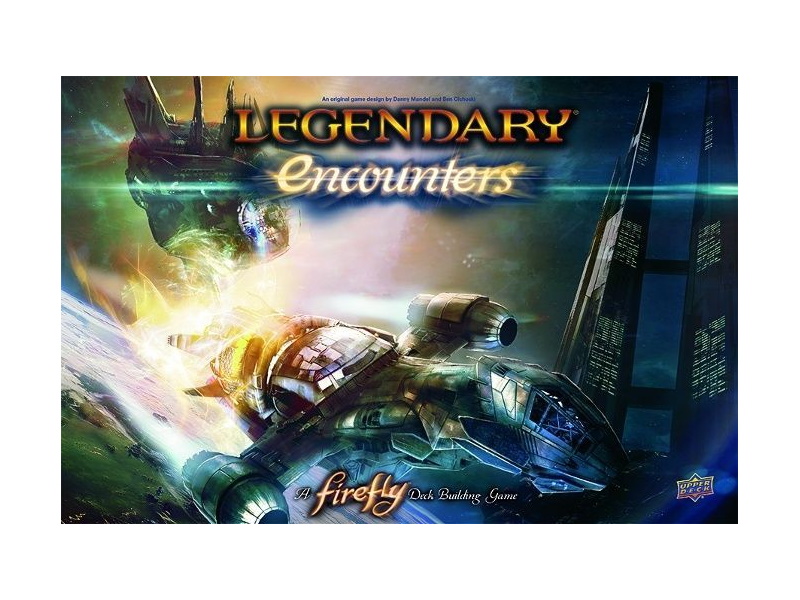