The latest release from North Star Games, Oceans invites two to four players to explore the depths of the ocean, creating unique, aquatic species. Each player will be competing for the opportunity to feed amongst the vast environment, either from grazing the reef or directly attacking other species! This game plays in about an hour or hour-and-a-half, and is suitable for ages 12+.

Each turn in Oceans, a player will complete four separate steps in the following order:

In the first phase, you’ll be playing one or two cards, each of which represent a different evolutionary trait for a species. You can either play a trait card to start a new species, play a trait to an existing species to further develop it, or discard the card to migrate fish, usually to the reef for grazing.

One thing to keep in mind here is that, while the game is enormously theme-driven, there is no fish to attach these traits to - that is to say by simply playing a single trait down, you are abstracting a species based on that one trait. As you play more traits to each species, you can imagine how it might look or act, but there is no base form or husk upon which to iterate your gloriously adaptable fishes. This makes the gameplay much more smooth, but may feel weird when you’re first getting the hang of the game.

Next, you will choose a single species to feed, and you can do that by either taking from the pool of fish tokens known as the reef, or by attacking another species, thereby stealing their stored fish and placing them on your own tracker. The number of fish you can take is based on the various traits you take for each species. Some, like the Filter Feeder, allow you to gain a bunch of fish from the Reef, while others like Apex Predator give you enough strength to attack other species.

After one of your fish feeds and you resolve any other relevant secondary abilities, all of your fish will Age, which means taking one or two of the fish from each of your species’ tracks to add them to your hidden scoring pile. If any of your species fall short of the number needed for aging, they will go extinct, causing you to discard the entire species.

Finally, you’ll need to refill your hand up to six cards, choosing between more surface cards or to take the upgraded evolution cards found in the Deep deck.

While my initial impression left me wanting more variety in the Surface deck (the cards you start out with and continue to play for free throughout the game), upon multiple play-throughs I discovered how varied each game can be from the randomized scenario cards and the sheer volume of Deep cards available. The Filter Feeder really does seem like the ideal start card at the beginning of the game, but I found that clever use of what you have available will keep your species viable without it.

Oceans is a game that allows you to build an incredible number of unique combinations, and is really satisfying to come back from a hand of traits that seemingly had little to no synergy on the surface. By the middle of the game, and well into the late game, it feels like a brain teaser every turn trying to build and sustain more and more species for the opportunity to add increasing numbers of fish to your scoring pile.

I am personally looking forward to more games of this in the near future, and I am more than happy to recommend this for a group looking for satisfying combo-building and a touch of take-that for the underwater predators lurking about! Add to that the fun holofoil extras from this Kickstarter version, and you’ve got yourself a winning game night.

Oceans is available now from our webstore. 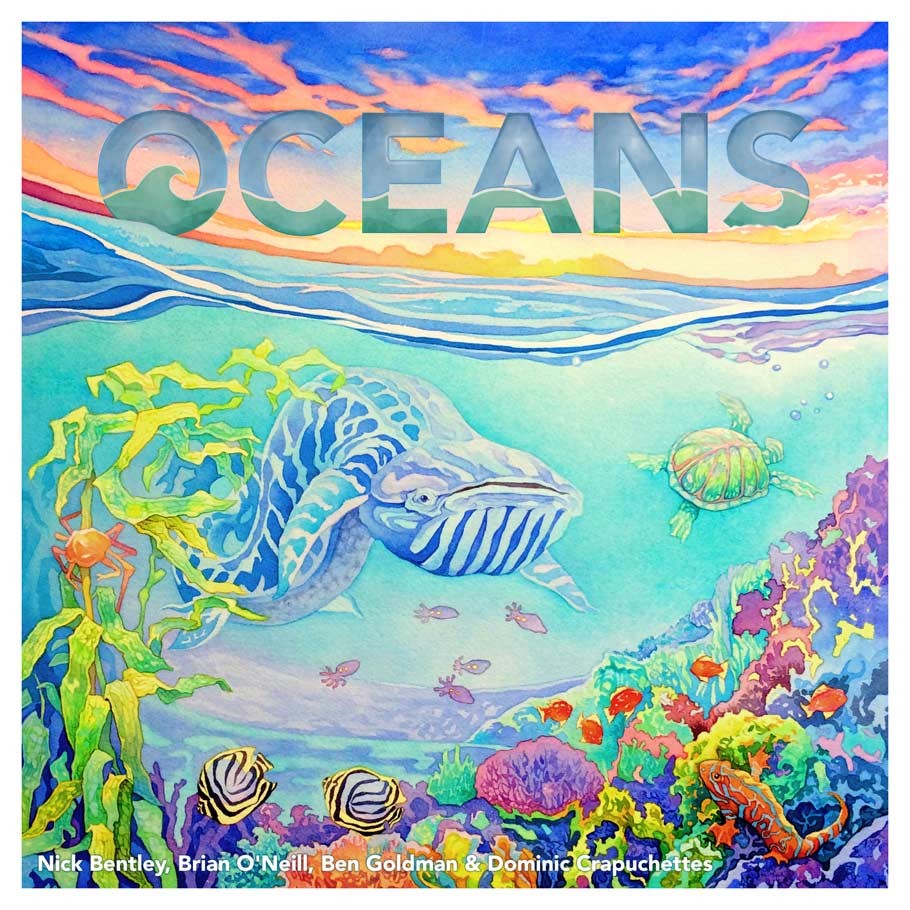