Grab your band and hit the road in this thinky roll n’ write for up to 8 players! Choose a region, either the UK or the US, and compete with rival bands to see whose tour can last the longest. Each turn you’ll assign numbers (determined by rolling dice) to various areas on the map (determined by the deck of cards) in an attempt to chart out the path for your band to take. At the end of the game, which occurs when all regions on the map are filled, you will draw out the route by connecting regions to one another. However, you’ll only be able to connect regions with either the same number or a larger number, so the path you take will have to follow an ascending numerical pattern. It’s harder than you might think!

Each turn a player will roll both D10s and flip three cards from the deck. The results on the two dice will dictate what numbers you write on your map, combining the two numbers rolled in both combinations. For example, if the player rolls a “2” and a “7,” each player will need to write a “27” and a “72” on their board. The cards, on the other hand, will determine which regions of the map you can record those numbers. Each map is divided into six areas - West, Central, East, each divided into North and South. So, for instance, if Central, East, and North are drawn for the round, you’ll need to write the 27 in one of those regions, and then the 72 in one of the other two remaining regions. The third region is ignored. Each card also highlights a specific named region on your map, and if you write one of your numbers in that particular area, you can circle the number as well, making those areas more valuable to pass through.

Much of the time you will be looking to collect numerically adjacent numbers as much as possible. So if 1’s are rolled several times, likely resulting in two numbers in the teens, you’ll probably want those pretty close together so you can draw a connection between them at the end of the game. Unfortunately, the cards don’t always flop in the most beneficial order…

Luckily for us, the chances of rolling doubles on the dice at some point during the game seems pretty high. If that happens, instead of writing only one number (“33” for example, as you can’t combine those numbers in more than that one way), you’ll get to draw a star on any space one of the regions on the cards! Stars will act as wilds at the end of the game, so you can connect any number to it, though it still must represent a “legal” number. You can also get a star if all three cards are of the same region.

At the end of the game, you’ll need to draw a route connecting as many states or countries as possible, scoring one point for each region you pass through. You can start your tour anywhere you want, so luckily there aren’t any additional constrictions to make this task any more difficult. You’ll also score one point for each region that has a circle around it. Add those two numbers together for your final total and compare with your fellow musicians to find out who had the most successful tour!

This is definitely one of those games where you either play it safe and commit to a shorter route, or you paint yourself into a corner and just hope for the dice to roll your way in those last couple turns. Either way, I have had a blast playing the game. As with many roll n’ write games, everyone plays simultaneously, so there is very little waiting around for your “turn.” This makes the game scale very well and I personally have played with 3-6 with the same amount of fun each time.

The abstraction of writing numbers all over the map can certainly feel a little random when you first learn the game. Only after you complete your first tour will the mechanics make a little more sense. I would say this game benefits from multiple plays, so strap in for some long road trips with the band.

I will also take a moment to mention the incredible quality of the components, as I have come to expect this level of professionalism from Board Game Tables, which have published several of our Staff Picks at this point! The player boards are double sided dry erase maps, and they’re fantastic. The cards are a nice thickness, and the ten-sided dice are over-sized and a lot of fun to roll!

Pick up a copy for yourself and let me know your first and highest scores! I hit 31, which I am pretty proud of, but lost out in my second play through. Have fun, and talk soon!

On Tour is available now from our webstore. 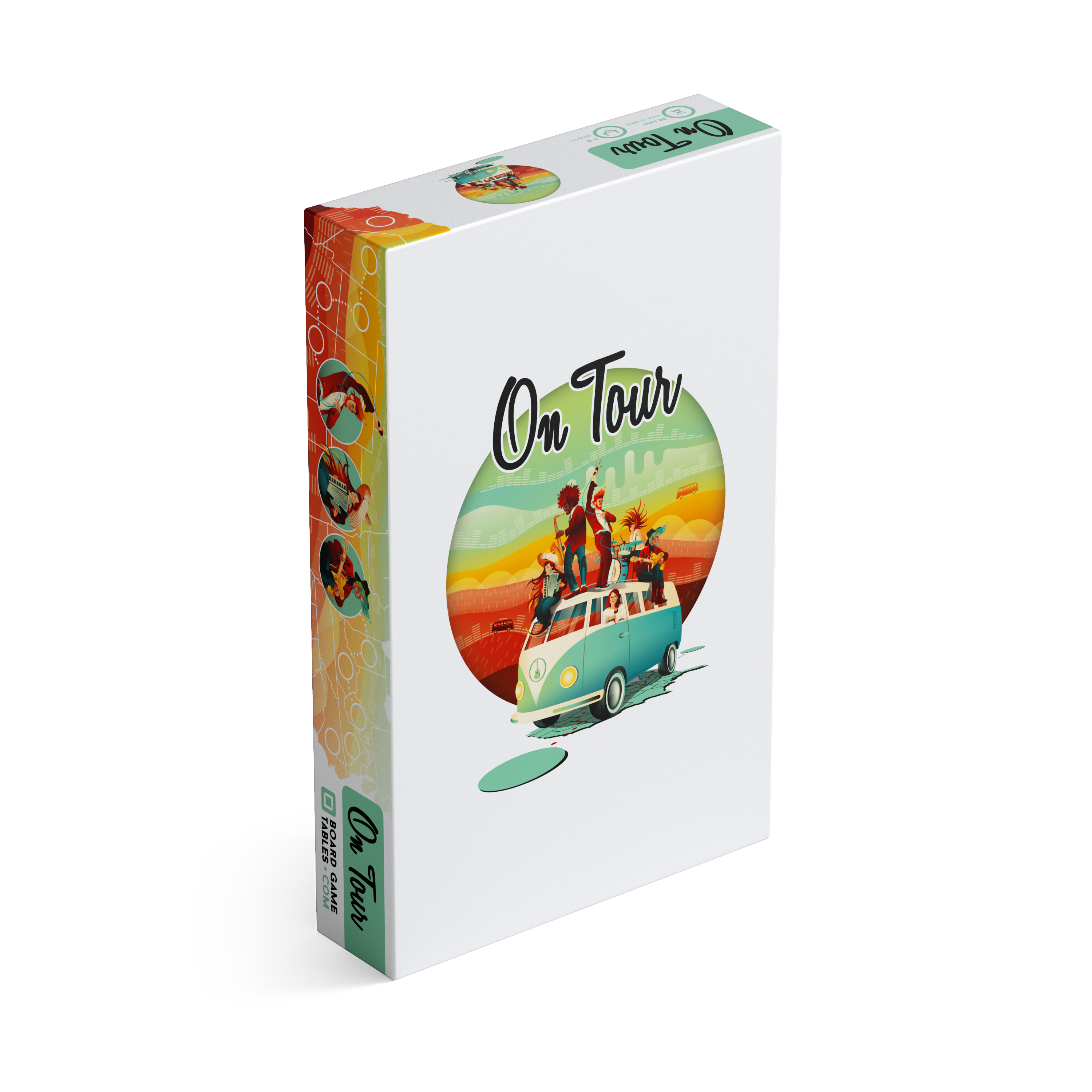