Paladins of the West Kingdom

Paladins of the West Kingdom is a clever game of worker placement where you and up to three opponents compete to best defend West Francia around the year 900. Over the course of seven rounds you will develop your own player board, using your pool of different workers to use the different available actions to earn points.

During each round each player will choose a Paladin to assist them, giving them different temporary bonuses to get the rewards of different actions and also give a bonus or reduce the cost of one of the game's twelve player board actions. After these selections players will choose a tavern card and between these two types of cards each player will receive six workers that come in six different types. Ten of the twelve different actions require one of four particular types of worker (Fighter, Huntsman, Merchant, and Cleric) in order to perform and depending on your boardstate actions may require up to three workers to achieve the desired effect.
Of the twelve actions, six are connected to the three attributes you track on the left side of your player board (Influence, Piety, and Strength) These six actions will have some rewards locked behind having enough of one of the three attributes and will often improve one of the other two attributes. These actions in addition to requiring three workers, may also require Silver or Provisions, which can be acquired through the hunt or trade actions. The develop action requiring two workers and four coins, can be used to reduce the number of workers one of the attribute track actions will require for the remainder of the game. The recruit action can take a card's one time effect for a single worker, or an effect for the rest of the game for two. The pray action can clear workers from your board, allowing you to use the same action more than once in a round. Finally the conspire action lets you exchange any worker for a criminal, which can be used for any action type, and interact with the suspicion deck and debt mechanic. In addition to the scoring you get from the attribute tracks, the actions will score you some points, often for doing it as many times as possible in a game.
Paladins is a flexible worker placement game with different worker types that plays very well at two players. A fantastic medium-heavy weight game that has me looking forward to what Shem Phillips makes next.

Paladins of the West Kingdom is available now from our webstore. 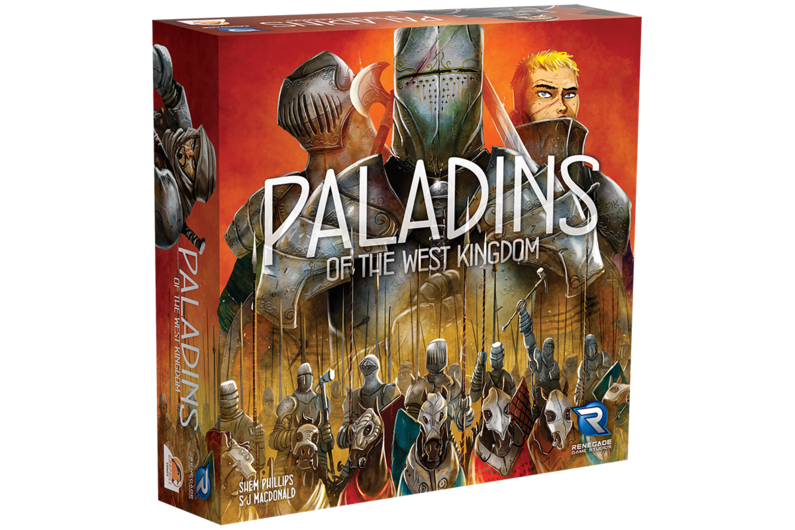