Scooby-Doo and the Gang find themselves investigating a mysterious mansion and you can join in on the sleuthing with Scooby-Doo! Betrayal at Mystery Mansion. Working together as Mystery Inc, each member of the gang will work together to explore the mansion and its exterior that change with every game, gather clues to find out what’s going on, and solve the mystery before the villains achieve their goal!

Based on the best-selling game from Avalon Hill, Betrayal at House on the Hill, Betrayal at Mystery Mansion simplifies the rules and adds in a more comical touch to the hit game for younger audiences. Although much of the game stays true to the experience of previous Betrayal titles, to give a more new player friendly experience, the simplified rules remove player elimination and allows any player to volunteer to be the monster when they are revealed.

The game offers 25 different scenarios, each with their own story and goals, giving the game a bevy of replay value. The unfortunate side of having so many scenarios is that you may not have time to play through each one organically, and even if you do, a few scenarios may prove bothersome due to broken rules.

Stepping into the shoes of Scoob and the Gang was a trip down nostalgia lane for me. As I worked together with the other players to uncover the mystery, we cracked long forgotten jokes from the Hanna-Barbera cartoons, broke out into the Scooby voice for the plentiful ruh-roh situations we ended up in, and enjoyed the narrative of our own Scooby-Doo adventure.

I really enjoyed this lite version of a classic game from my early days of gaming. With it’s easier rules and use of video conferencing, I enjoyed several games with stay at home friends and their families without them needing a copy to play.

Scooby-Doo! Betrayal at Mystery Mansion is now available from our webstore and you can find the rest of the Betrayal line of games there as well. 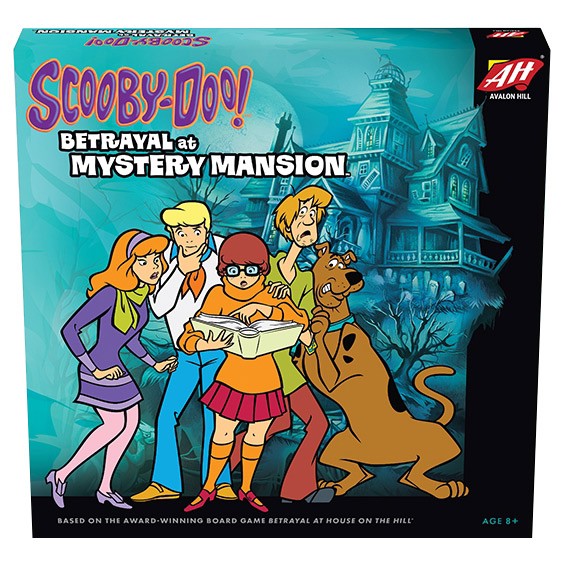