Skull is a bluffing and push-your-luck game played in San Francisco for at least one hundred years.  The Hervé Marly version of the game, illustrated by Tom Vuarchex, is based on notes from a journal by Marly's great-grandfather Joseph. In Skull, each player has four disks, three with flowers on the reverse, and the last one with a skull. It is played over a series of rounds of placing, bidding, and revealing. Starting with the first player everyone in turn places one of their disks facedown in front of them. Then once every player has a disk facedown you get the choice of either adding an additional disk to their stack or moving to the bidding phase.
When you bid, you are declaring how many disks you're going to flip faceup without revealing a skull. A player can bid any number up to the number of facedown disks available. Continuing around the circle, players may declare a higher bid or decline; once a player has declined to bid they may not bid in the current round again. When there remains one player who has not declined, or the maximum bid has been reached, they then begin to reveal. When revealing disks the person doing so must first flip over all of their own and then choose other peoples disks until either they reveal a skull or they hit the number that they bid. If a skull is revealed you randomly lose one of your disks and it is discarded facedown (if you should reveal your own skull you may choose which disk to lose), if you have no more disks left you are eliminated. Alternatively, if you hit your target and reveal to your bid showing only flowers you earn a point. If it is your first point you flip your player board as a reminder and if it is your second point you have won the game. Be it by being more daring, having a better read, or a better bluff, Skull rewards making the best choices.
Plays up to six with one box or even more with a second!
-Izaac 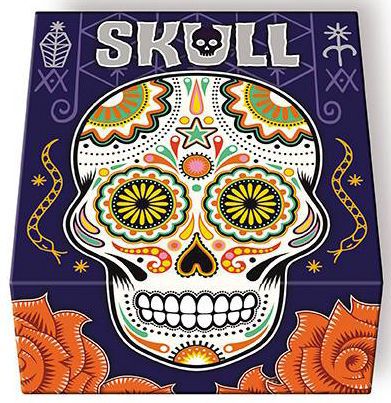