Splendor Duel is a two-player game from Space Cowboys. Based off of the original Splendor, you play as the leader of a guild of jewelers, trying to earn more prestige than your rival guildmaster. In it, you will acquire jewel tokens in order to acquire jewel cards to try and get to a set number of victory points before your opponent.

Like in the original Splendor, on a turn you can take jewel tokens, take a gold token to reserve a card or purchase a card, spending tokens to pay its cost. Cards you acquire can help to reduce the costs of other cards as well as provide prestige points. Once you acquire enough prestige points, you win the game. Unlike the original, Splendor Duel adds new twists that the original does not have. One way that Splendor Duel differs is that instead of having all the tokens available at any given point, there is a board that you take the tokens from. When taking tokens, you can take up to three in an uninterrupted row, column or diagonal. Taking three identical tokens (or both of the rarer pearl token) gives your opponent a privilege token which they can spend at the start of their turn to take a token for free. Another difference is that cards do more now. Some cards will have abilities that resolve upon purchasing them. These include taking an additional turn, taking a privilege token, taking a jewel token, stealing a jewel token from your opponent or functioning as a card of any color. As with the original, there are still bonus points you can get from acquiring enough cards, but as opposed to the Nobles from the original being randomized and each requiring a number of cards of specific colors to obtain them, some jewel cards in Splendor Duel will have crowns on them and obtaining your third crown allows you to take one Royal card, as does obtaining your sixth crown. Splendor Duel also offers more ways to victory. As opposed to just obtaining a large number of prestige points, in Splendor Duel, you can win in three ways: obtaining 20 total prestige points, obtaining 10 prestige points from cards of a single color or obtaining 10 crowns.

Splendor is a game that I love and have played a lot of rounds of. It's a game that I have played with friends who play lots of games as well as people who haven't played many games and it works for both. I even bought the digital version and played a lot of Splendor games, mostly against the AI, while traveling on buses or planes. While it is a really fun game and does work at two players, it tends to get a little repetitive when you play a lot of two player games in a row. As a reasonably simple game, the strategies won't change all that much from game to game. With Splendor Duel, there's a lot more going on which makes games of Splendor Duel more different than games of Splendor. The board you take tokens from becomes a major player in strategy. Taking tokens to block your opponent is important, as is when you want the board refilled as it not only gives your opponent a privilege token, but also only refills what tokens have been spent since the last time it was refilled, leaving open spots for where the tokens both players currently have would go. Also important are the pearls, as there are no cards with pearls, but a good deal of cards require a pearl token to be spent. Beyond that, the abilities add a whole new level of strategy for figuring out what cards you want to go for.

If you're looking for a reasonably simple two-player game that is still strategic and gives you a good amount of variance between games, and especially if you enjoy the original and want a more robust two player version, Splendor Duel is a fantastic game.

Splendor Duel is available now from our webstore. 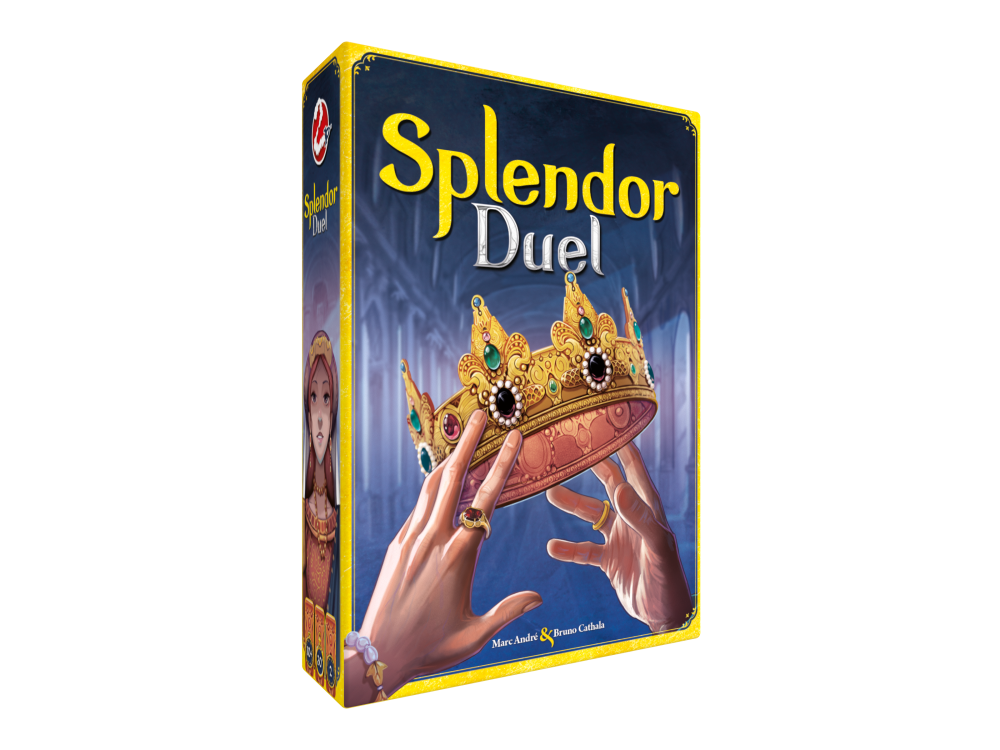