Star Wars: Outer Rim is a 1-4 person game where you play scoundrels and bounty hunters trying to get by on the outskirts of a galaxy far, far away. In it, you'll recruit crew members, take on jobs, hunt bounties, deliver cargo and buy ships, gear and mods in order to become the most famous/infamous living legend.

Outer Rim starts with you choosing a character from among 8 Star Wars characters including classics like Han Solo, Lando Calrissian and Boba Fett, as well as newer characters like Dr. Aphra and Ketsu Onyo. From there, you get a ship and starting job/cargo and start playing. On your turn, there are three steps, Planning, Action and Encounter. During the Planning Step, you choose whether to move your ship, gain 2000 credits or recover all damage. During the Action step, you can take any number of actions, but only once per given action. The main actions involve delivering cargo, trading with players in the same space as you and buying from the market. When you buy from the market, you get to buy from any of the different decks, buying cargo to deliver, crew to help you out, mods to make your ship more powerful, gear to make you more powerful, ships to improve your journey through space, bounties to hunt and jobs to complete. After taking actions, you move on to the Encounter step. If you're in a space with a patrol from a faction that you have negative reputation with, you have to fight the patrol ship. Otherwise, you can choose to encounter the space you're on, a contact from the space you're on or use an Encounter ability that you have (e.g. jobs will often have you use an Encounter ability to complete them). At times you will have to pass tests, often to complete jobs. To do so, you roll two dice and the more skills you have, the more outcomes where you succeed are available. There is also combat, both ground and ship, that have you roll dice against an opponent to see who can deal more damage to the other. Along the way, you'll have various ways to gain fame, often by completing jobs or bounties. The first person to reach 10 fame wins the game. 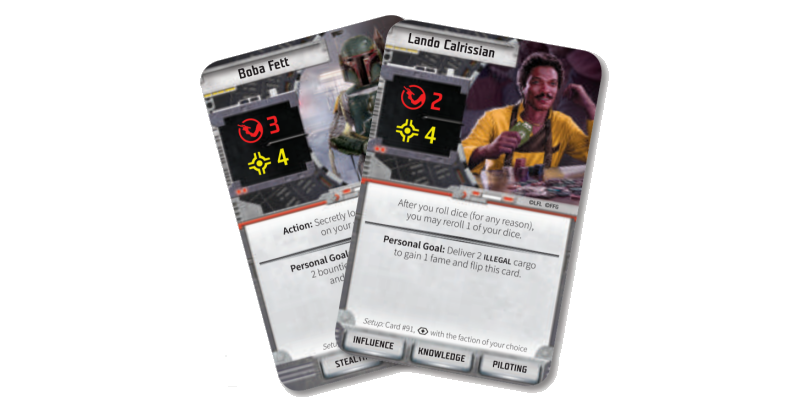 Outer Rim has a solo mode where you play against one of the more heroic characters (Lando, Han, Aphra or Jyn Erso). While the game plays out fairly similarly for you in that you still take your turn the same way, the opponent AI flips over a card to determine what it does on its turn. The AI will often move to its closest goal, try to buy a card from a specific deck, then try to complete a job. While the AI doesn't make specific decisions as it moves about, the AI cards give them a lot of different ways to earn fame and makes it a lot easier to complete jobs and deliver cargo (as the AI doesn't have to pass tests or roll for illegal cargo). As it doesn't have to do as much to complete jobs, it can be tricky to fight the AI if it gets some large reward jobs that would normally require a lot of effort, but it also will not hesitate to take a job on the other side of the board and then it has to make its way there (unless other destinations that are closer come up first).

When Outer Rim first got announced, my mind immediately compared it to the Firefly Board Game which is a favorite of mine. Both are sci-fi games where you are the captain of a ship, collect gear and crew, as well as missions to complete. You have to make your way around a board representing space and there is a lot of space in comparison to the number of planets. Both have you play as famous characters from their respective series and have references galore to their series. Having played it, it does remind me a fair amount of the Firefly Board Game, but slimmed down a bit. Whereas you had to collect fuel to move faster in Firefly, you can just move in Outer Rim. While you had to keep your crew happy in Firefly by paying them and making sure you didn't do Immoral jobs with a Moral crew, your crew is just there to help out in Outer Rim. While there were different objectives in Firefly that made you play out the game differently each time, Outer Rim just wants you to get to 10 fame first. In Firefly, each deck belonged to a different space and you'd have to go to specific locations to get certain jobs or buy certain upgrades, where you can buy from any deck in Outer Rim as long as you're on a planet. One thing you can do more in Outer Rim is interact with the other players. While you can trade and potentially steal a crewmate from someone in Firefly, you can interact with other players in Outer Rim when you have a mission to play Sabaac against another player or if you want to hunt a bounty on another player's crewmate. I don't want to say that one is better than the other, as they are just different; Outer Rim is mostly just a simpler game than Firefly. 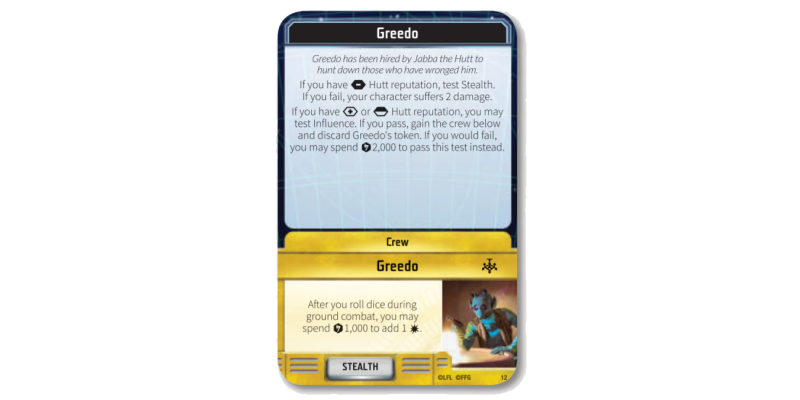 I really enjoyed Outer Rim. Each of the characters has a unique ability and a way to earn fame, like Lando always being able to reroll dice and wanting to deliver illegal cargo or Boba Fett being able to look at contacts before choosing whether or not to encounter them and wanting to deliver bounties. The non-starter ships are also interesting, as they'll have different stats and slots for cargo, mods and crew, as well as abilities that can turn them from the generic model (YT-1300) to the unique ship (Millennium Falcon). I also really like the Databank deck, which are 50+ cards that describe people and situations throughout the game. All of the contacts list a Databank number, as well as a lot of jobs will list a Databank number. This allows for the game to have small tokens for the contacts, but also have them each have different reactions when encountering them, a lot of which will have references to the series, like Lando not needing to pay to recruit Lobot as a crew member or Greedo not wanting to work with someone who has negative reputation with the Hutts. There are also some cards that there are more than one version of which means that certain actions can play out differently each time. Delivering illegal cargo for example always has you take Databank card #1, of which there are 4 different copies, so each time you deliver illegal cargo, you take a random Databank card #1 and have different ways to have to smuggle the cargo.
If you want to play a Star Wars game where you're not tasked with saving the galaxy, Outer Rim is a great game for exploring the Star Wars universe as one of the more roguish denizens. It's a fun game if you're looking to get a crew and pal around the galaxy looking for jobs. While it has a decent amount of set-up and can look intimidating at first, it's actually a pretty simple game once you get into it and is a solid choice for a group looking for a medium-complexity game that'll take a couple hours to finish.
Star Wars: Outer Rim is available now from our webstore. 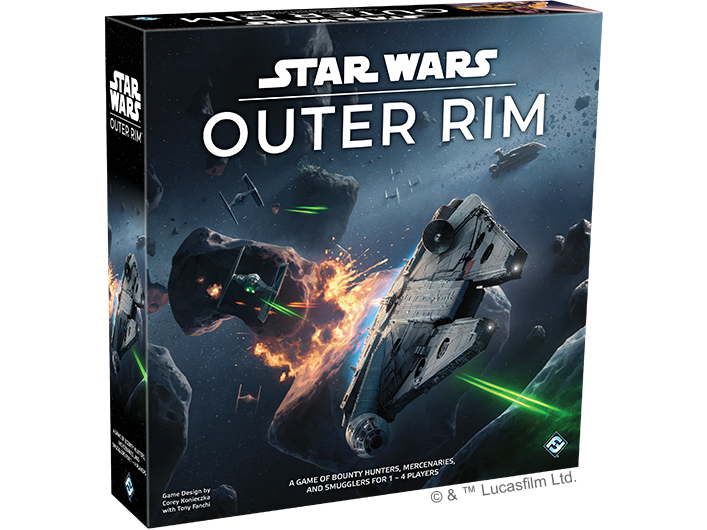