The Wizards of Fabulosa have recruited the best warriors from every nation of every timeline to compete against one another in the legendary arena - Welcome to Super Fantasy Brawl! This brilliant new competitive game from Mythic Games pits two players against one another, each controlling three mighty Champions, in a game of positioning and combat.

The game is a race to five victory points, with players earning one each time they knock out an enemy Champion, and earning one or two points per Challenge they accomplish. Champions can return to the arena after being knocked out, so no one is ever permanently out of the match. While it can be tempting to go full aggro, with the right positioning a player can earn three or more points on a single turn! 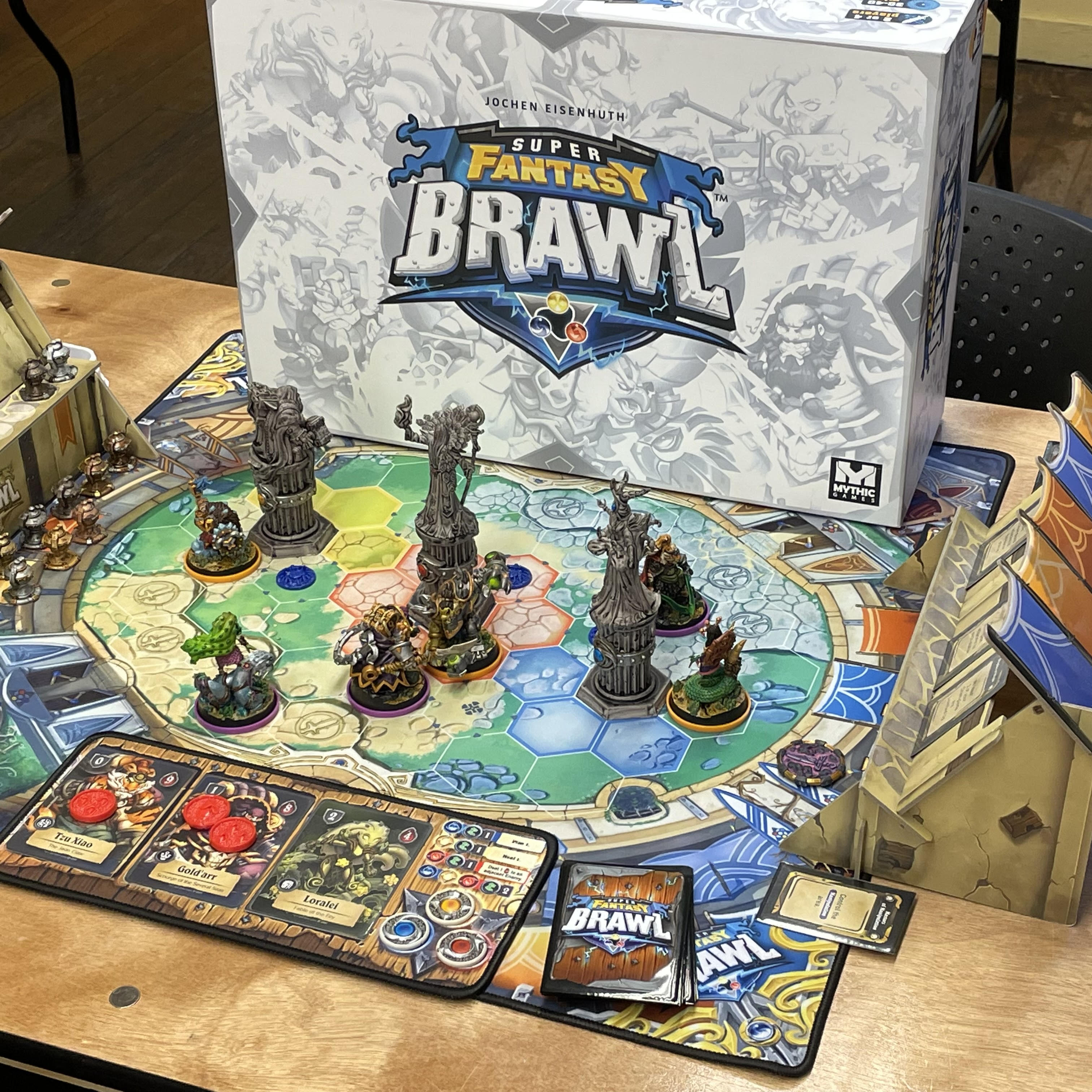 A Team in Super Fantasy Brawl is composed of three Champions. When a player selects a Champion, either from their own collection or from a draft pool, they take that Champion and the Champion’s corresponding cards. Each Champion comes with six cards unique to them and their playstyle. After selecting three Champions, that player will shuffle all eighteen cards together to form their play deck. Now they’re ready for the Arena!

Each turn a player will have access to three Cores of magic - Creation (Yellow), Manipulation (Blue), and Destruction (Red). To activate a Champion, the player will choose one of those Cores to exhaust and either execute a standard action from the player board, or play a card matching the color and Champion from their hand.

Cards are divided into three types: Attacks, Skills, and Reactions. Attacks will attempt to deal damage to an opponent, while Skills do a wide variety of things. Reactions can be used to respond to attacks to either increase defense, allow you to cancel effects, or reposition your Champions after the attack.

The best way to win the game is accomplishing Challenge Cards, most of which have to do with positioning your Champions strategically throughout the Arena. For example, a Challenge Card might award a player for having all three of their Champions adjacent to the same statue, or perhaps one adjacent to each! The statues also oversee particular zones called “Areas,” and for certain Challenges players will need to control an Area by having more Champions in that zone than their opponent.

This dynamic between dealing damage to opponents while also controlling and accomplishing Challenge Cards make this game incredibly fun and varied. Challenge cards progress along a track the longer it takes to accomplish them, which also varies how many points they’re worth. Challenge Cards move to the right at the end of each Round, and players check to see if they’ve accomplished any Challenges at the beginning of their turn. This means that a player always has a window of opportunity to respond to their opponent, making for tense, exciting, and balanced gameplay.

This is hands down my favorite skirmish game, and has been since its release in 2020. The rules are simple enough to get people playing shortly after sitting down, with enough strategic depth to learn turn-to-turn and keep coming back for more matches! Players are usually operating from a hand of five cards, with four different Standard Actions, so there are enough options to be creative with your turn without being too overwhelming.

Each Champion is distinct, and with a total of twenty-four different Champions to choose from, you can assemble any of the (over) two THOUSAND unique team combinations! Selecting teams is a blast, be it a casual game bringing your favorite Champions, or using competitive draft rules at a Tournament.

The last feature I’ll mention here is the price - the base game comes with everything you need to play including six Champions for $45, or you can jump right into the action with a single 3-Champion expansion for $25 and begin playing with someone else who already has the board and tokens. The models are large and pre-assembled, so you can begin playing immediately.

It’s hard for me to express exactly how much I adore this game, so please come by some time for a demo to experience it yourself! We’ll be hosting casual games and tournaments in the near future, and I hope to see you there!

Super Fantasy Brawl is available now on our webstore.