That Time You Killed Me

Congratulations! You’ve done it! You’ve created time travel! You’ll certainly go down in all of the history books that’ll you’ll be re-writing… Only there’s one problem, some rival upstart is claiming they created time travel, so there’s only one thing to do. Erase them from the timeline before they can get to you!

That Time You Killed Me is an abstract strategy game where you must eliminate your opponent’s pieces from two of the three game boards. The game offers a basic game that we’ll go over in this review and several extra rule sets to be added in for a degree of escalating difficulty and challenge as you master the art of time travel.

The game is set up with three 4x4 game boards representing Past, Present, and Future. Each player will have a player piece on identical spots of each board, space 1 for the white player and space 2 for the black player, and the start player begins with their focus token on the Past board while the second player begins with their focus token on the Future board. Each player will also have a number of reserve pieces that are brought in their time traveling shenanigans, but they are limited in number and will not be refreshed as your pieces are eliminated.

On a player’s turn, they will choose a single player piece on the board they have their focus token on and take two actions with it. The following actions in the basic game are:

Now we get to the fun part, Murder. To eliminate your opponent’s piece, you can accomplish this in one of two ways:

If on your turn, your opponent only has pieces on one board, you win the game and will go on to your place in history… at least until the next rival time traveler appears.

That Time You Killed Me is a thinking strategy game, like playing multiple games of chess, but if the pieces could interfere with the other games, that will cause many moments of indecisions as you try to figure out the best board to prioritize on. The basic gameplay makes this easy to pick up, but the forward-thinking that goes into outplaying your opponent and capitalizing on their mistakes without leaving yourself open sets That Time You Killed Me as one of my current favorite two-player strategy games. The game can also be scaled for less and more skilled players to play against one another by having the more skilled player start with less pieces in their reserve. In addition, the extra rule sets that come in the game get added in as chapters, so you can add more rules and actions in as you want to increase the difficulty and challenge of the game adding in more and more interesting replays of That Time You Killed Me.

That Time You Killed Me is available now from our webstore. 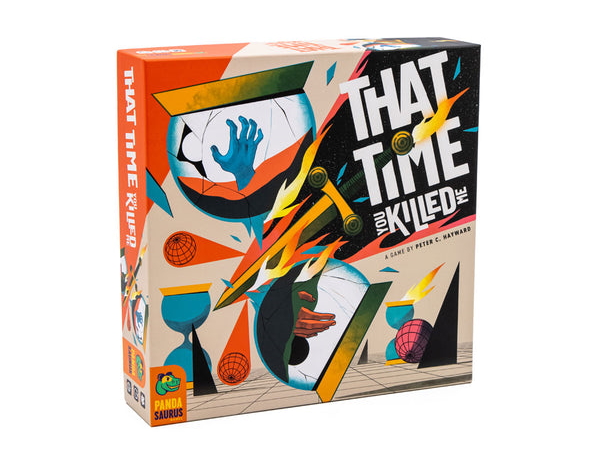