Produced by Oakland publisher Slugfest Games, The Red Dragon Inn is about the story after the end of the story. You're an adventuring party, pockets full after a set of adventures stopping for the night for an evening of drinking and gambling. Players in turn will have the option of discarding cards before drawing up to their handsize of seven, play one action card, and then take a drink. With each player having a unique deck based on different adventurers each will have a different approach to being the last adventurer standing. There are two ways to be eliminated in The Red Dragon Inn, the first is to lose consciousness by having your inebriation (starting at 0) and fortitude (starting at 20) meet at any part of their shared tracker which results in the rest of the party splitting your money and putting you in a room to sleep through the night, the second way to loose is to run out of money (the gambling subgame being a great way to lose it) getting kicked out of the inn and having to sleep in the stables. While the original has four characters though each of the seven standalone versions of the game and expansion characters there are over 40 different adventurers to play as each with their own unique deck and tricks to be the last adventurer standing. Pull up a barstool and pick up that drink, may the hardest party-er win! 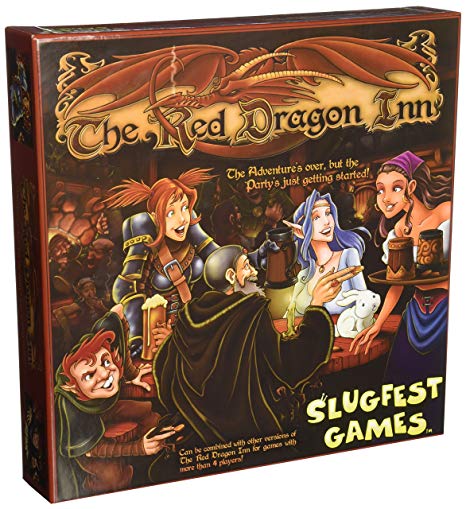