Verdant is a point-salad game in which individuals are creating a dream mansion to house their house plants. Each room is filled with four different ambient light types, and each plant has icons clearly arrayed to show what light levels they most prefer. The gameplay follows 13 rounds during which individuals will draft a room or house plant as well as a beneficial item from a central pile, placing these in a checkerboard pattern so no plant is adjacent to another plant and no room is adjacent to another room. The items allow for quick bonuses, and the catch up mechanic for drafting skipped over cards can be quite powerful, as such selections lead to Green Thumb token acquisition. The games typically take about 20 minutes per person playing, with different variants for games with players that are extremely quick and games with players that like to think hard about how to maximize their plant placement optimization.

What drew me to this game at first was the lovely cover art. Once I opened the game, I was immediately entranced by the elegant art and the fact that every single plant has a unique plant fact. I'll play this game with multiple groups and the inclusion of the plant fact allows for me to become absorbed in my own mansion, much in the way that Wingspan has me reading about the bird facts and scanning my own little section means that downtime is delightful. The art is absolutely charming and there isn't any stress about points until the very end, after the last card has been placed, when all the points are tabulated. For one of the groups I played with, we just skipped scoring and admired our little mansions. With another group, everyone was highly competitive and the scoring was itself its own kind of fun.

There's something very charming and uplifting about playing a game in which house plants and gardening activities are able to truly succeed while it's rainy and miserable outside. This is a game that allows for players to either think very seriously or not think at all. There is strategy in selecting the house plant or the room that you know your opponents would like, and I found that the more that I played the better I got, but this game never feels as though it is truly cutthroat. It enables without demanding.

The game states that it plays 1 through 5 players, and the only reason I would say stop at 4-5 is because of the downtime between turns. With the right group and the right atmosphere, the components should allow for an even larger number of players to engage. That said, waiting 30 minutes for your turn because of a 12-player count is not most people's idea of fun. If it's yours, cool!

I would firmly categorize this as a game I would teach my mom. It's also a game I would teach my dad, which is even more rare. My mom likes simple rules and beautiful design and she very much dislikes take-that style games. My dad prefers games that are fast enough and engage his brain a lot. He is also a botanist, and the inclusion of genuine plant facts really does sell this game for that audience. For my dad, the points would be a major factor for his enjoyment of the game. For my mom, it's 50-50 whether we'd even count them, but we would still have a ton of fun looking at our completed plants and secretly feeling very proud of the number of victory points we earned.

And that brings me to the final thing that I truly enjoy about this game: you feel good about the number of points you scored. There are plenty of games where even playing well, the number of points earned at the end is something like 15. In Verdant, there will be lots of points and it does feel very satisfying to earn them and to know that you have created a magical mansion for your garden to thrive. It's not quite fully meditative or fully competitive and the balance it hits suits me just fine.

Verdant is available now from our webstore. 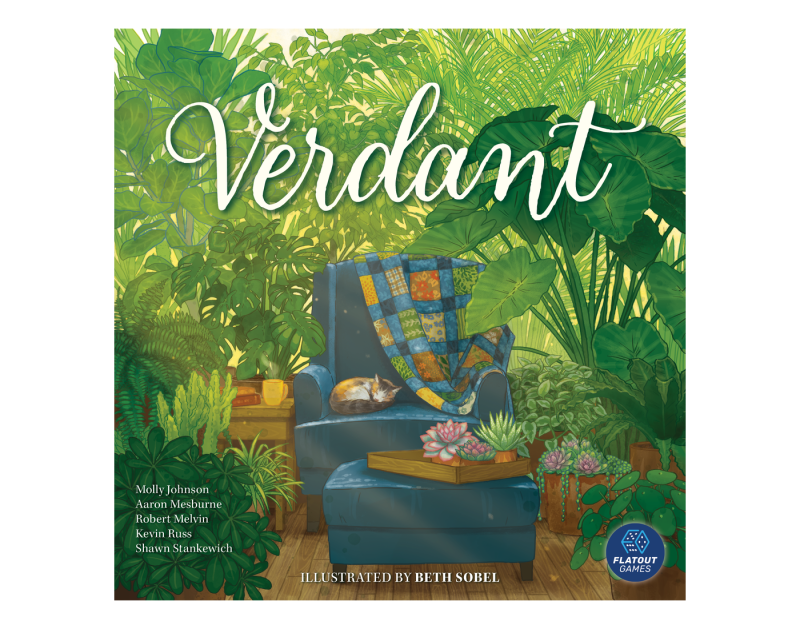