"I can say categorically that ... no one in the White House staff, no one in this administration, presently employed, was involved in this very bizarre incident." - Richard Nixon, 1972

Decisions, decisions. Watergate is a game of push and pull representing the investigation and legal proceedings concerning the cover up of the Watergate break-in in June of 1972. One player will play as the editorial staff of the Washington Post trying to connect Nixon to the break in at Watergate. The other player will act as the Nixon administration, attempting to obfuscate what happened and complete his second term in office without the scandal boiling over.
In each game round the two players will be playing tug of war over a few different tokens with a hand of cards, four cards for one player, and five for the other. Evidence which comes in blue, green, or yellow (or any combination of the two), momentum, and initiative. Typically these cards will be discarded to move one of three evidence tokens, momentum, or initiative towards you on a track. Alternatively the card may be played for it's effect, and many of the cards will remove themselves from the game should they be used this way. Once all the cards have been played the tokens will be awarded to one player or the other. The Editor wins by connecting evidence from Nixon to two of seven possible informants with evidence they win in a round placed face up on the game board. The Administration wants to collect this evidence too, to obscure it, they'll get to place any evidence they collect face down on the game board, blocking the path between Nixon and the persons involved in the break-in and cover-up. A round white token used every round represents initiative, the player with the initiative will draw five cards and play first in the round. The last token is momentum. The Administration needs to collect five of them to win the game. The Editor would like to collect them too, not just to stop Nixon from getting away with it, but also for the powerful effects they'll get after collecting their third, fourth, and fifth momentum tokens.
In each round you'll want to do more than you can. Can you make the best choices? Did the opposition anticipate that move? Uncover the truth or hide it away in Watergate.

Watergate is available now from our webstore. 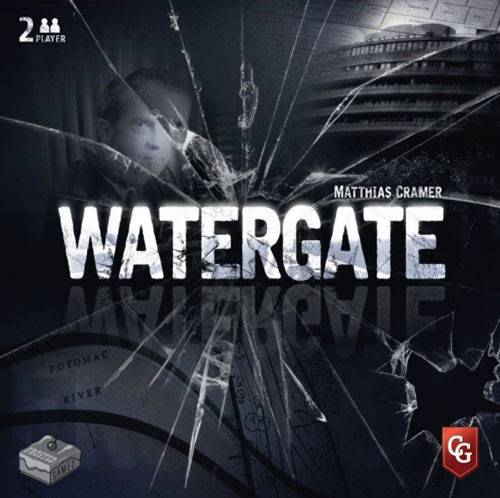