Welcome to DinoWorld is a roll-and-write game from Alley Cat Games that was Kickstarted to great success in 2018. In it, you play a designer of a dinosaur theme park and build the enclosures for dinosaurs as well as the paths and facilities necessary to gather visitors and to make your theme park highly successful.
There are two different game modes for Welcome to Dino World, Lite Mode and Danger Mode. They play out fairly similarly, although there are a couple of differences, the main one being that in Danger Mode, the generators providing electricity to the fences can fail and the dinosaurs can attempt to break out. Danger Mode also offers labs that provide more powerful research that helps out more than the basic research from Lite Mode, helping you to stave off a break out and to utilize your resources more efficiently.
To start, each person gets a sheet to build their park on. There are also two facilities dealt at the beginning of each game, one for tourism and making the park more attractive, the other for upkeep to make sure that the park runs smoothly. There are also visitors dealt between each pair of people so that you are competing with the neighbor on your left for the visitors between the two of you and the same goes for the right. Each turn, the three dice get rolled and you write the numbers down on your sheet. These are the values you can use to build your park this turn. Different dinosaur enclosures will require different die values to build from, with the higher numbers corresponding to dinosaurs that require more power to their enclosures and larger enclosures, but that are worth more points. Each enclosure requires a path to the enclosure so guests can get there, as well as a generator (or generators) providing power to it. You can also use a die value to build one of the two facilities, with the Recreation facilities requiring a 1, 2 or 3 and the Upkeep facilities requiring a 4, 5 or 6. Finally, you can use die values to build paths with different types of paths costing more pips from your die. Each round, you are only able to build one enclosure and one facility, so you have to choose which you want carefully. In Danger Mode, you then check to see if the generators malfunction where the more dinosaurs you have, the more likely generators are to malfunction. If they do, the enclosures get damaged and enough damage will have the dinosaur break out, losing you the points you would have claimed for the enclosure. Then, you check to see if you have fulfilled the requirements for the visitors to your left and right. If you have, then you claim the card and earn points for it. If both you and your neighbor have fulfilled the requirements, you both earn the points. After eight rounds, you add up points for each of your dinosaurs in your park, how many points your facilities earned you and how many points from visitors you received, as well as bonus points for not using all your generators. Whoever has the most points is declared the winner!
As a roll-and-write game, Welcome to DinoWorld is a fun game that has some fairly basic rules and gameplay, but has a good amount of choice in how you want to utilize the dice for any given round. Visitors can be an important factor so while building the largest enclosures might get you more points just between dinos, getting the bonus points from visitors can be crucial for earning the most points. Facilities will vary greatly from game to game which makes figuring out which facility you want to build any given turn a challenge as well. While the research and labs are powerful (and have no bonus at the end for not using them, so make sure to use them), you also don't want to use them too early and get screwed over for not having them available later. The number of players will also affect how the game plays out, where having only 2 people means the visitors you're competing for are the exact visitors your opponent is, so them getting one means you lose one, whereas with 3 or more people, your neighbor getting a visitor doesn't necessarily mean you miss out on one if they went for one from their other side instead. Something I also like is that Lite Mode and Danger Mode, while very similar, play out differently enough so that Lite Mode doesn't necessarily feel like a downgrade once you've played Danger Mode. There is enough happening in any given game that you feel involved and interested throughout without feeling overwhelmed by too many decisions (as there are only three things you can do with dice, albeit with options for two of those things). I recommend Welcome to DinoWorld if you want a fun, dino themed roll-and-write.
Note: The box as printed says the game is for 1-75 people, but the regular edition does not come with the automa cards that allow you to play solo. You can play a solo variant using the rules found here where you try to get three 6vp and three 10vp visitors. 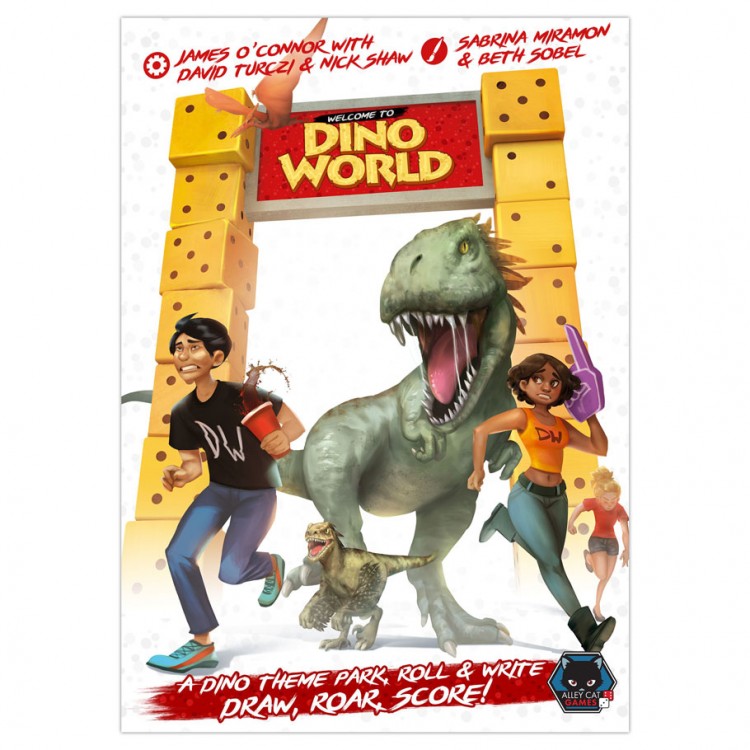