The fast paced action zombie survival game returns in Zombicide 2nd Edition. Zombicide 2nd Edition brings back all the familiar elements of a zombie survival game: cliched survival objectives, unique and interesting survivors, and of course, hordes of zombies wanting to take a bite out of you! But 2nd edition isn’t just the same game with a 2 at the end. In addition to all the familiar Zombicide play and components, the gameplay has been tweaked to make games smoother and dangerous.

In Zombicide 2nd Edition, players take on the roles of 6 survivors with two objectives to accomplish. First, complete the mission objective within the time limit given and second, survive! To do so, each survivor comes with their own set of skills that, when combined with teamwork, will give them the edge against the hordes of the undead. If any player is eliminated, a mission objective cannot be fulfilled, or if a losing condition is met, the players will succumb to the ranks of the undead and lose the game.

The setup of each game will be based on any of the 26 different missions available in the main rulebook, even more if you get any of the expansions. The board is split up into different zones, representing wide areas of street, rooms, and more. The game is played out in three phases each round. The player phase, zombie phase, and end phase.

During the player phase, each survivor will take three actions. Players can move to a new zone, search for valuable loot, open and close doors, reorganize/trade their items, attack zombies in either melee or ranged combat, complete objectives, make noise to attract zombies towards them, or do nothing and pass for the remainder of their actions. As the survivors eliminate zombies, they will gain adrenaline points which will give them immediate access to new and powerful skills to help them combat the incoming zombies hordes. Of course, since this is a cooperative game, it is in the player’s best interests to communicate and coordinate their actions to quickly accomplish objectives and to keep all survivors alive.

And then comes the zombie phase. There are two steps to the zombie phase, activate and spawn. Zombies activate by either attacking any survivors in their zone or move. If there are any survivors in a zombie’s zone, they will attack them and deal 1 damage for each successful attack. Survivors can choose to split the attacks in any way there are more than one survivor in the same zone with the zombies. If there are no survivors in the zombie’s zone, they will move one zone towards a survivor that is in line of sight with the most noise tokens or towards the zone with the most noise tokens if no survivors are in line of sight. After activating, the zombies will spawn in from the spawn markers. For each spawn marker, you’ll draw a card from the zombie deck and spawn a number of zombies based on the highest adrenaline level of the survivors. There will also be some special zombie cards that will allow zombies to activate again or spawned zombies to activate upon spawning, so it is best to always plan accordingly in the event of a worst case scenario.

Lastly, there is the end phase. All noise tokens generated this round are removed from the board, the first player token is rotated to the next player on the left, and play continues in a new round until the mission objectives are met for a victory or the survivors fail and become just another part of the zombie horde.

Zombicide 2nd Edition isn’t your typical zombie survival board game. In many other zombie themed games, players are often tasked with the goal of simply surviving and escaping from the threat of zombies. Zombicide turns that formula around and lets the survivors play out a role in an adrenaline filled action film about bashing zombies and kicking ass. The high paced action and simple rules of Zombicide make the game flow incredibly smooth and provide a really great sense of positive feedback as your survivors get stronger with each round of the game and mow down the hordes of zombies. With the large selection of scenarios, different options of survivors (many of who are hilarious parodies of famous characters and actors), and unique zombies, Zombicide offers loads of replay value that keep you coming back for more.

Zombicide 2nd Edition is available now from our webstore. 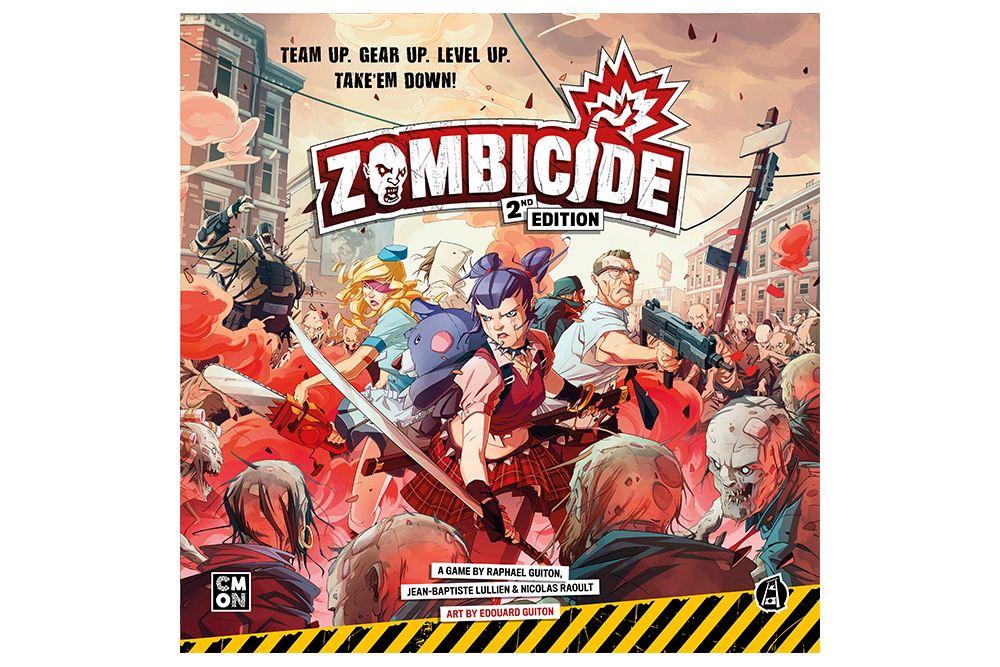