A Game of Thrones The Card Game

Too many strange faces, Tyrion thought, too many new players. The game changed while I lay rotting in my bed, and no one will tell me the rules. —George R.R. Martin, A Song of Ice and Fire
A Game of Thrones Living Card Game is an exciting struggle for dominance based on the novels by George R. R. Martin with both One-on-One (Joust) and Free-for-All (Melee) game modes. As one of eight powers trying to take control of Westeros you'll have two decks, one 60 card deck with Characters, Locations, Attachments, and Events that you'll play from you hand to try to best your foe(s), and a second, small, seven card plot deck that represents your faction's aims and plans to defeat the other houses by amassing fifteen power for your faction. Rather than turns alternating between players there is one shared turn with a string of seven phases: 1. Plot 2. Draw 3. Marshaling 4. Challenges 5. Dominance 6. Standing and 7. Taxation.
In the Plot phase each player will choose an unused plot from their plot deck, in addition to powerful abilities plots will have four numbers: Gold, Initiative, Claim Value, and Reserve. When plots are revealed the player who has the highest initiative value gets to choose who the first player will be for the turn.
In the draw phase each player will draw two cards to add to their hand.
Next in the Mashaling phase each player will receive their gold for the turn and then play out Characters, Locations, and Attachments to best their foes in the challenges phase.
Characters played, along with any abilities they might have, will have a strength value and up to three different challenge icons Military (the hilt of a sword with a red background), Intrigue (an eye with a green background), and Power (a crown with a blue background). In player order each player may declare each challenge once in any order they choose. First the attacking player will declare which of their characters are participating in the challenge and kneel them. Next the defending player will select characters to defend with and kneel them. Players will then take turns using actions on characters, locations, and attachments they have on the table, and also event cards from hand to tilt the challenge in their favor. Once both players pass without an action the player with the higher total strength in the will win it, with a tie going to the attacker. If the attacker wins to an amount equal to the claim value on the attacker's revealed plot, the effect that occurs is based on the type of challenge won, in a martial challenge the defending player will choose characters they control to die, in an intrigue challenge cards will be randomly discarded from the defending player's hand, and in a power challenge power will be taken from the defender and added to the attacker. Additionally if any challenge is undefended the attacker will get a free power.
In the Dominance Phase the total strength value of each player's standing characters will be added to their unspent gold and the player with the highest value will earn a power.
In the Standing Phase, all knelt characters, locations, attachments will stand.
In the Taxation Phase, all unspent gold will be lost, and players with more cards in their hand than the reserve value on their revealed plot will have to discard down to that value.
Turns repeat until a player wins on the spot the moment they have 15 power.
While that is a lot of rules for a summary, the richness of the game is that it's about planning and reacting, knowing your foe(s) and sussing out what they're trying to do to you. Each of the different factions gives you varied tools and a whole range of playstyles from the aggressive Greyjoys to the patient Martells.
AGoT gives you two different ways to get into the game either through the core set, which will also include tokens and the cards you need for the additional effects in melee gameplay, alternative there are the intro decks, which will deliver an experience more similar to the full cardpool with the different expansions available.
Give the story the ending you think it deserves with A Game of Thrones, the Living Card Game 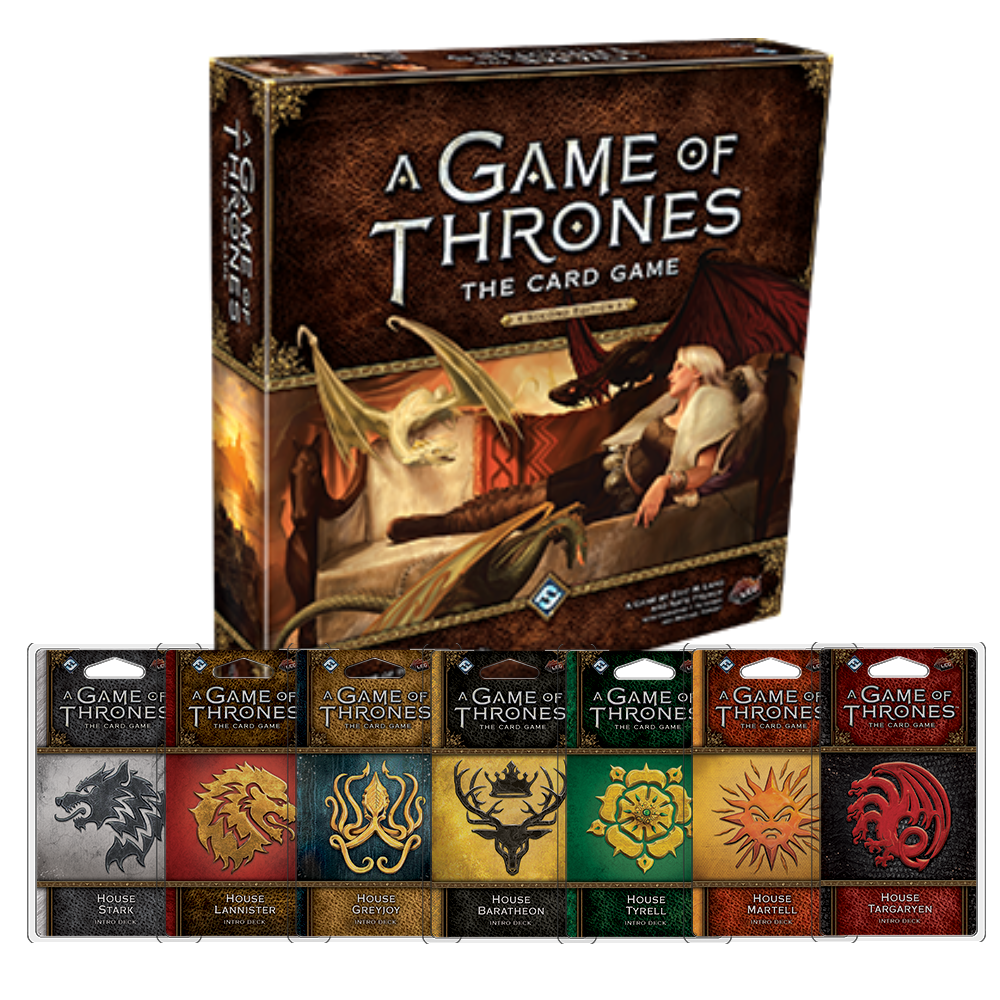