Anomia refers to the sensation a person has when they have a word on the tip of their tongue and cannot say it, this game will make it happen to you. Each card in Anomia has a category on the card, and a symbol in the middle of it. You and up to five other players will take turns flipping cards faceup onto a stack in front of you. Each of these cards has a symbol in the centre, and if ever the symbol on your card matches the symbol on someone else's card, the two of you are immediately racing to name a word in the other player's category. The winner of the race will collect the card from the loser (facedown in a separate stack). If the card revealed by the loser also matches another player's card, they immediately are in another race. When the deck of cards is exhausted, whoever has collected the most cards from other players is the winner!
I adore the tension the game has and the panic that sets in when a second race wasn't expected after a player's loss. Simple prompts with a variety of answers and Anomia has two different decks so your short term memory doesn't just use answers from the game you just played!

Anomia is available now from our webstore. 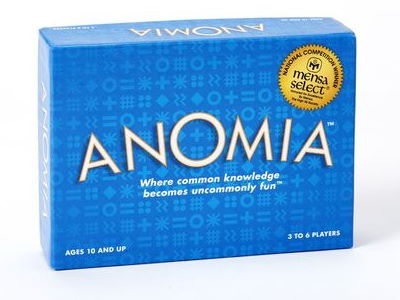