If you aren’t familiar with Keyforge, it is a really neat card game with a unique niche - Every deck is unique! Keyforge uses an algorithm to generate each deck, including the name of the deck (the “Archon”), and the 35 cards that comprise the deck itself. Since these decks are generated during the printing process, and each card has the title of the Archon printed on it, there is no deck building or modification.

The cards from each set are divided into a number of factions, and another big kicker to the game is that there are no resource costs for playing cards! Instead you will choose one of the factions, called Houses, and you can play, discard, and use only the cards of that particular House for the turn. It is a really cool system, and I definitely encourage you to check out the other four sets that came out prior to Dark Tidings.

The Dark Tidings set continues the exploration of the Crucible, finding a new faction in the Unfathomable, an aquatic House dedicated to disruption. Exhaust your opponents creatures, keep them from readying, and thwart your opponent in myriad other ways with this oppressive new play style.

Dark Tidings also introduces the Tide mechanic, a tug-of-war struggle over an intrinsically meaningless binary. At the modest cost of 3 Chains, you can Raise the Tide, causing your side of the field to be High Tide, and, consequently, make your opponent’s side Low Tide. However, many of the 280 new cards provide plenty of incentive to take control of the Crucible’s new force! For example, the powerful card Strange Ordination provides three (!) æmber, but it can only be played if the Tide is High. Or take the Hookmaster for instance - if the Tide is High when it Fights, your opponent loses two æmber. In the end, controlling the Tide will definitely have some kind of impact on your game.

The final addition in the new expansion is the rare Evil Twin deck. These decks have the exact same cards as another deck in print, a concept that breaks the very foundation of the original selling point of Keyforge! However, these Evil Twins feature a number of cards that have a dark variant present only in Evil Twin decks. The Evil Twin versions of cards usually have an inverse effect on the card or the game at large. In the Evil Twin I pulled, for example, it featured five Evil Twins, one of which is the Mookling. While the standard version of the card increases the cost your opponents’ keys by the value of its Power, the Evil Twin variant gains a number of +1 counters equal to the æmber spent on your opponents’ forged key when they forge it!

I have been a fan of Keyforge since it originally came out, and while I am not a big-time tournament goer, and I can’t tell you the value from a competitive standpoint,  I can tell you that this expansion adds a LOT of fun flavoring to an already novel game. The push and pull of the Tides is really fun, and for the most part it can be controlled without too much personal sacrifice. Most decks have one or two cards that let you Raise the Tide by card effect, but you’ll sometimes need to gain those three Chains to grab the advantage for a particular turn.

The new cards are all really fun to play, though the Unfathomable can be a real pain to play against if you don’t have the right tools, or let your opponent get set up! All their exhaust cards can really get in the way of your plans, though no more than any other control-oriented Houses (e.g. Shadows). The play style is definitely disruptive, but I wouldn’t describe it as unhealthy, or that it creates a negative play experience. If anything, it presents a new puzzle to counter and play around with what you have at your disposal.

The Evil Twin deck that I got (1 out of the 20 decks I’ve opened) has five Evil Twin cards, and they are definitely cool to play with! That said, I wouldn’t go out of my way to chase these down. While they do have cool, sometimes powerful effects, they’re not inherently better than the standard version of the card. Going up against an Evil Twin is by no means a doomed effort, so I think they have done a good job of maintaining balance in exploring this new feature.

A note on rarity - Along with the one Evil Twin deck I pulled, I also got three Mavericks, and one Legacy. Make that of what you will!

All in all, I just can’t get enough of this game! The new expansion breathes new life into an already fun game, and I am sure I’ll be enjoying this a ton for the foreseeable future.

And, as a bonus, I am happy to report that myself and a coworker tried out the new Co-op version available to download for free on the Fantasy Flight website! We faced the Keyraken together, and it is a really fun, interesting challenge to take on. I am always a fan of gameplay variants, even when they’re generally uninteresting, just for the sake of variety. However, this Keyforge Adventure definitely packs a lot of interesting decision making as you take on a titan as it tries to ascend to the surface world. It collects æmber in much the same way a real player might, but instead of forging keys it will “advance,” eventually breaking the surface of the ocean to wreak terrible destruction on the Crucible after advancing four times.

You can check out this variant (as well as another Adventure I haven’t explored yet) on the Fantasy Flight website here:
https://www.fantasyflightgames.com/en/products/keyforge/

Keyforge: Dark Tidings products are available now from our webstore. 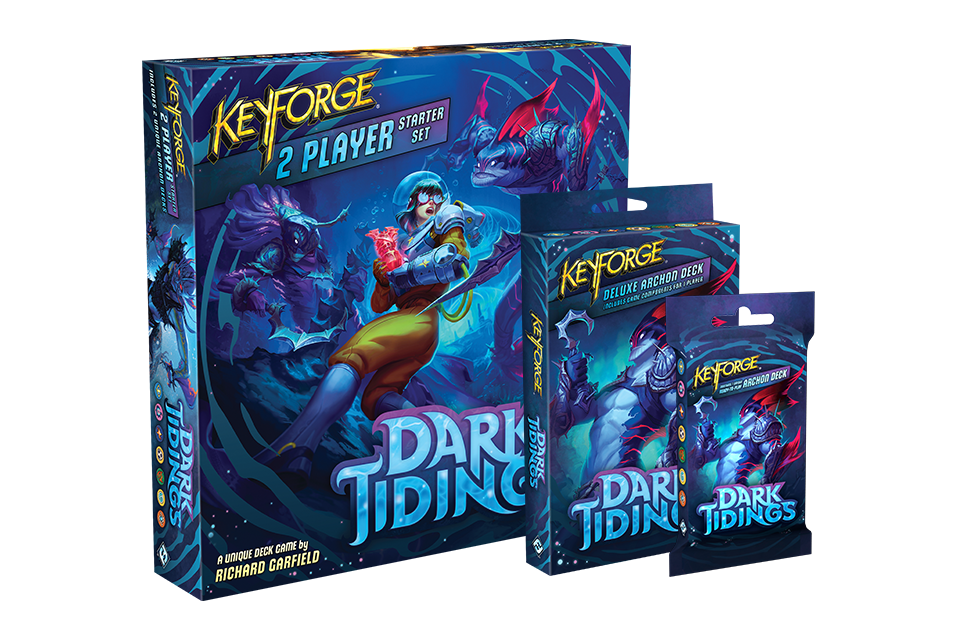