Star Realms is a fast-paced deck-building game for two players, you will engage in an epic battle in space against your opponent for absolute dominance in the galaxy.

The game is setup by shuffling up the trade deck and placing out five cards from the top to form the trade row, with all of the explorer cards set face-up on the opposite side of the trade deck from the trade row. Both players take their own deck of ten starter cards, consisting of eight scouts and two vipers, shuffling them and setting it in front of them. Each player sets their authority to 50 and randomly determines which player to go first, the first turn player will draw a hand of three cards and the second player will draw five.

On a player’s turn, they will do any of the following actions in any order until they either pass or cannot perform any of the actions.

Ship cards (vertical cards) and base cards (horizontal cards) are the two types of cards that you will play. When a card is played, it will trigger its primary ability, normally giving you trade (gold coin), combat (red target), or authority (green shield). Trade and combat accumulate during your turn until used and authority is immediately added to your current authority. If there are any ally or scrap abilities on the card, you may choose to use them. An ally ability will have one or more of a color-coded faction symbol on the left of the ability denoting how many other cards of that faction are required to be in play to use the ability and scrap abilities will have a black trash can symbol on the left that can be used by permanently removing the card from your deck and placing it into the scrap heap. Ship cards will be discarded into your discard pile at the end of your turn, but bases will remain in play for future turns until destroyed. Base cards that are in-play from previous turns can use any of their abilities in any order, providing you meet any requirements.

Trade and combat can be used in any amount from your accumulated total of cards and abilities. Trade is used to acquire new cards from the trade row or any available explorers into your discard pile, by using any accumulated trade to pay for the cost of the card (the upper right gold coin symbol).

Combat will be used to reduce either your opponent’s authority or destroy their in-play bases. Bases will only be destroyed if combat equal to their defense number (the lower right silver or black shield) is assigned to them and a player’s authority cannot be reduced if they have any bases with the outpost designation.

When a player chooses to pass or runs out of actions to take, they will end their turn. Any ships in-play or cards in hand will be discarded, non-destroyed bases will remain in-play, and all remaining unused trade or combat will be lost. After that, the active player draws a hand of five cards (if there aren’t enough cards left in their deck, their discard pile until is shuffled up to reform their deck allowing to draw until they have up to five cards in their hand) and play continues in turns until a player is reduced to zero or lower authority. The first player to reduce their opponent’s authority to zero wins and will reign supreme in the galaxy… at least until the next battle.

Star Realms is on the unsuspecting games that will often fly under a lot of gamer’s radars. The core game’s packaging is very minimal and hardly offers any details on what it is, making it an easy title to overlook.

But in its small box, Star Realms offers so much. The base game gives you a great two player experience where deck-management and careful planning is greatly rewarded, but the simplicity of its mechanics and card ability synergies allow for quick reversals of the bord state and comebacks. And with three more stand-alone expansions offering variations in the trade deck and small card expansions that change up the gameplay, Star Realms is one small title that packs a big punch of gameplay.

Star Realms is available now on our webstore. 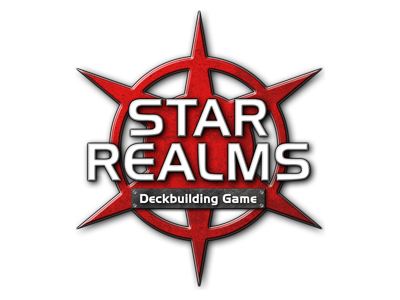