Warp's Edge is a solitaire game from Renegade Game Studios' Solo Hero Series where you are playing a lone Starfighter trying to stave off an alien invasion before they are able to warp to your home and destroy it. In it, you'll use your lasers or piloting skills to destroy or evade enemy ships as well as energy to upgrade what your Starfighter can do.

To set up a game of Warp's Edge, you have to pick a Starfighter to pilot and draw a Skill card to start with as well as a Mothership to face off against. Your Starfighter will determine which group of tokens you can buy from for the game and the Mothership will determine how many enemy ships of each level get put into the enemy ship deck. Each Starfighter will also have its own abilities as well as a unique amount of hull and shields while each Mothership will have different ways it attacks and defends and its own set of special powers. Gameplay proceeds much like a deck-building game where you have a hand, play out what you have, buy new things, then draw a new hand. With Warp's Edge, you have tokens instead of cards and so instead of building a deck of cards, you're building a bag of tokens. Each turn, you'll play laser tokens to attack enemy ships, maneuver tokens to evade enemy ships and energy tokens to buy new tokens and repair shields. There are also POWER tokens ("P" token, "O" tokens, etc.) that are different for each Starfighter and have unique abilities. After you've played out all the tokens you want to for a turn, you discard the rest and any enemies that weren't stunned by a token that turn will attack you, damaging first your shields, then your hull. Then you draw 5 new tokens from the bag and refill the enemy ship row if it isn't full. If you have less than 5 tokens in your bag, instead you move on to the next warp. When you warp, you reshuffle all the enemy ships you encountered and put them back on top of the deck and draw a new Skill card as well as put all tokens not in your hold back in the bag. Then you start again, fighting off enemy ships and building your token pool. Destruction of the Mothership sections remains, but everything else resets during the warp. If your Starfighter gets destroyed or the Mothership makes its final warp, you lose. If you are able to fully destroy the Mothership though, you win!

One good thing about Warp's Edge in comparison to a lot of other solo games is that the unique setup choices of Starfighter and Mothership drastically alter gameplay. While solo games will often have a few variants that can affect games slightly, playing with the Titan against The Hydra is a very different experience from playing the Achilles against The Dread. In addition to each Starfighter's special abilities, the POWER tokens that each Starfighter has access to will make each game different as well. For example, the "W" token that the Titan uses draws you three new tokens from your bag, while the "W" token that the Hermes uses counts as a double maneuver against more powerful enemies but is only a single maneuver against weaker enemies. There are 2 generic POWER tokens for each letter, but each Starfighter also has a special POWER token that is unique to it and really powerful. To keep going with "W," the unique "W" token that the Achilles uses destroys any enemy ship, but doesn't allow you to stun with lasers for the turn. The Motherships will also have different ways you want to build your token pool to defeat them. For example, The Hydra wants you to build a well-balanced pool as it has 3 sections, only one of which you can defeat with lasers, the other two requiring energy and maneuver, with each section attacking you each round while The Dread has sections that will deal a lot of damage and have a good amount of health, but can only attack or be attacked when the enemy row and deck is empty, wanting you to have a lot of laser tokens to deal with the Mothership sections and hopefully the other ships as well.

Warp's Edge does advertise that it is a solo game that has a Storybook included and I was looking forward to see what new things the Storybook would do to add to the gameplay. I imagined it being like the Hero Realms: Ruins of Thandar expansion that has you play through Hero Realms cooperatively with different enemies that give you different setups. Unfortunately, it is not that and merely a booklet detailing the story where you make decisions, a lot of which don't matter at all, and you end up arbitrarily picking a Starfighter, Mothership and starting Skill card. The story is fine for what it is, but ultimately pretty disappointing if you view it as a selling point of the game (which the game tries to do with a sticker on the front and a blurb about the storybook). It doesn't detract from Warp's Edge, as the game itself is still a lot of fun, but don't get the game because it has a Storybook.
Warp's Edge is not an easy game to beat. And it shouldn't be, because what fun would that be if you casually beat the game in your first try. There's a lot of challenge as you have to either defeat all the enemies to even attack the mothership or the mothership is able to constantly attack you, putting a lot of pressure on you to keep it under control. But I think the game is ultimately worth the effort, because it is incredibly satisfying when you play out your turn and realize you have enough damage to finally take out the last section of the Mothership. Heck, even defeating the game once doesn't mean you're done, as there are 5 different Motherships to fight and 4 Starfighters to fight with. I recommend Warp's Edge if you're looking for a good solo game that's challenging and will last you a while.
Warp's Edge is available now from our webstore. 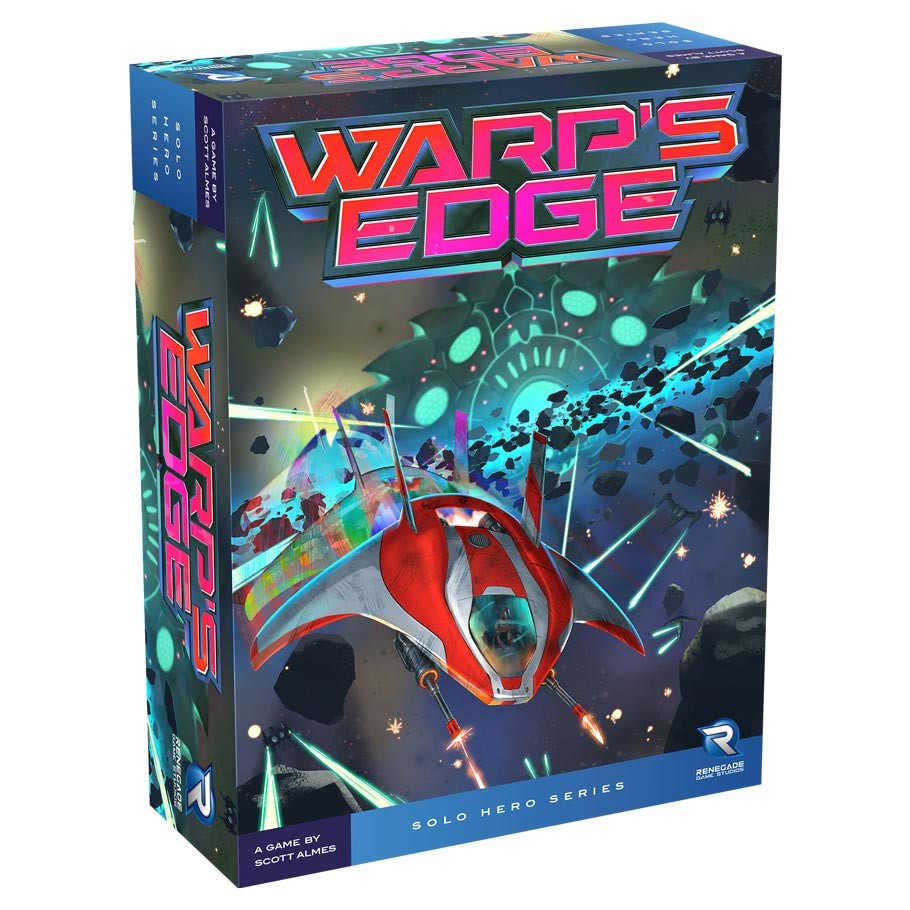