Arkham Horror Revised Edition is a Living Card Game system of Lovecraftian exploration and cooperative strategy. It can play anywhere from 1 to 4 players, and the game utilizes a system of blind drafting from a communal bag to simulate uncertainty when taking actions involving risk, such as combat or looking for clues. This bag can be modified to increase or decrease the difficulty or to add variable elements to each scenario, such as additional monster spawning or altering some minor mechanics to enhance thematic immersion. This game runs for 60 to 90 minutes, but the first scenario only took my partner and I about 45 minutes to run through. We are playing at the easy difficulty to fully experience the story, but in subsequent runs, I intend to increase the difficulty to hard.

This genre of horror comes straight out of HP Lovecraft, but while I found the game to be suspenseful and engaging, I did not find it to be scary or haunting in a way that was prohibitive. The artistic elements are consistent to the theme and individual illustrations are consistent within the game within itself. Most images portray a found-footage style scene, helping to sell the illusion that each asset and action is as the character played would perceive it. The antagonists followed a slightly different color scheme from the played characters, which further created a sense of unity against the building darkness.

The art style does tend toward green and purple and other stereotypically creepy colors, such as brown grays with minimal use of red, orange, yellow, or other warmer colors and hues. The cards are made of a slightly embossed cardstock, with thick cardboard tokens used for the drawbag, referred to in-game as the chaos bag. The bag itself is a nice velveteen felt, with a mid-range drawstring, not very silky but not deficient in any way. The components all nicely fit back into the box with a clear eye to organization and with room to house additional expansions and additional scenarios. You should be able to house more than one game within the line within this box. Great mindfulness was displayed in the game box setup.

In terms of rules, the difficulty to understand was moderate. Anyone who has played a collectible card game or a skirmish adjacent card drafting game, such as Unmatched, will have an easier time learning the rules than anyone who has not, as many of the rules for abilities, triggers, and sequences are pretty standard for a number of card game systems. Each player has three activations per round and each player can chain certain activations together given the correct keywords. Each player has nine options to choose from for their three activations, which are outlined on a convenient player reference card. For individuals who have not played a lot of trading card games or other similar genres, I would recommend taking the first mission very slowly to learn the rules. There's no timer and there is no rush, but a good understanding of what you can do can make the subsequent scenarios a lot more fun and a lot easier.

Personally, I really like the game. There are four separate ending results for each scenario, with the chance that more than this number can appear in other stories, and I really like that for replayability. Additionally, it is entirely possible to play a game once and go into a room and then another time and not go into that same room, which allows for a certain degree of flexibility with play style. It also aids in finding a particular style of play confident with optimal enjoyment. The deck building element at the end of each scenario is surprisingly easy to follow, and allows for an evolution of your character rather than simply changing every single aspect all at once, or creating such small modifiers as to simply be moving along the stat line. I really found the art to be quite engaging and I absolutely love the pacing of this game. My fellow player was a bitter detective specializing in combat ability while I was a librarian with a moderately good grasp of the fledgling concepts of channeling Eldritch magics. Our play styles were, from the design of the game to the art to the themes to the goals required of us, asymmetric in a way that allowed us to truly engage with the game without one of us quarterbacking the other. This kind of asymmetric cooperative play can be a little bit difficult to initially learn because we can't simply tell each other what moves are probably going to be most optimal. Each player gets to learn that for themselves. In easy mode, there really are no bad decisions, so it's a good way to get familiar with the deck. My one lament is that the game advises keeping to one difficulty level for the entire campaign. On the other hand, this means that in subsequent playthroughs, we will likely encounter the other ending scenarios and really get to have a wildly different story experience. I also really like that, because the chaos bag could be assembled beforehand and left as is, set up was maybe 5 minutes, and possibly even less than that. Some of these more complex narrative games can require pretty long setup times, so having a game that from opening the box to drawing our first deck of cards spanned 5 minutes was absolutely wonderful for me. I definitely recommend this game, especially if someone in the party has experience with either trading card games such as Magic, Flesh and Blood, Yu-Gi-Oh, or any of the many others OR if they have experience with any skirmish game, from Warhammer, to Unmatched, to X-Wing. Range is less important, but knowing how different abilities play off of each other is a very useful skill set.

Fans of Exit, Unlock, or other mystery games in which exploration is a primary aspect or fans of cooperative exploration games such as Pandemic Legacy or Betrayal at House on the Hill will also find this to be a truly delightful game with a few mechanics that are a little bit novel. Overall, this game receives a full 10 tentacles and 3 Eldritch pentagrams.

Arkham Horror LCG items, including the revised core set, are available now at our webstore. 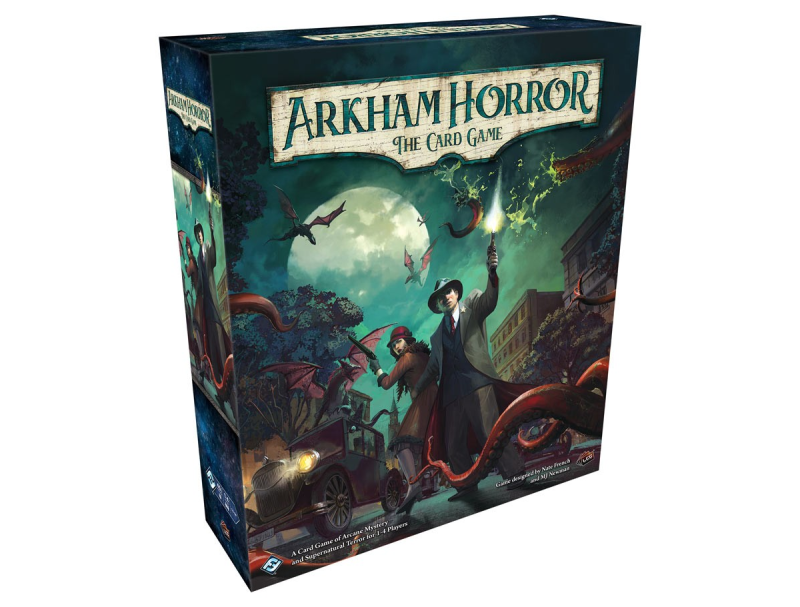