Genesys is a setting agnostic RPG from Edge Studio (formerly made by Fantasy Flight Games) that uses a dice pool system to determine not only outcomes, but the positivity or negativity of said outcome.

Genesys looks a lot more complex than it actually is when it comes to determining a random outcome. When seeing if you succeed or fail, you will roll a number of specialty dice. To determine your dice pool, you will add positive dice for all of the positives you have going into the roll (how skilled you are, what equipment you have to help, etc.) and negative dice for all of the negatives going into the roll (how difficult the task is, what things are working against you, etc.). Both sets of dice have 4 different results that can occur with positive and negative outcomes often cancelling each other out. Results can be 1) a blank side, 2) a success/failure, 3) an advantage/threat, 4) a triumph/despair. If your dice pool has more successes than failures, then the action succeeds. Otherwise it fails. But if your dice pool has more advantages than threats, then there is a positive result regardless of success or failure. Likewise, if there are more threats than advantages, then there is a negative result regardless of success or failure. Triumphs and despairs are much more rare (only appearing once each on the positive/negative specialty d12s respectively), but provide both a success/failure and an effect that is similar to advantage/threat, but more powerful. So a roll with 2 success, 1 triumph, 2 failures and 1 threat will result in a success (as the triumph provides a success making it 3 success to 2 failure) with a negative outcome (as there is threat without advantage), but a powerful positive outcome as well (from the triumph). 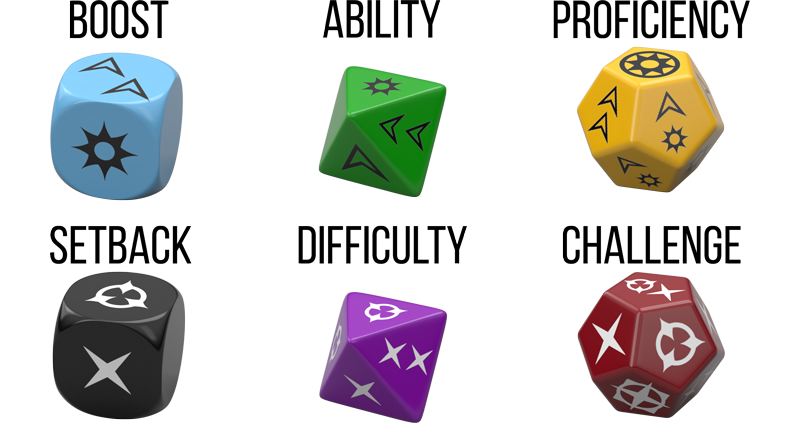 For combat, there is an initiative system that I actually really like. As in most initiative systems, once each character involved has rolled, you will create a queue based off of how many successes were in each dice pool, but instead of assigning characters to initiative spots, you assign each spot to the PCs or the NPCs. When a PC spot comes up, the players get to decide which PC goes and when an NPC spot comes up, the GM decides which NPC gets to go. So even if only one player rolled well enough to be ahead of the NPCs, the players get to decide each round which PC gets to act first. When attacking, you'll build a dice pool like with any other random outcome. If you succeed, you deal damage equal to the number of successes and advantages/threats, triumphs and failures can be spent for different effects. Defensively, you have both a defense rating and soak value. Your defense rating adds negative d6s to the attacker's dice pool and your soak value is how much damage you can absorb from any given attack without it hurting you.

As Genesys is setting agnostic, you can have a game in any setting that you want using the Genesys system. If you don't want to come up with your own, the core book does give you some examples of settings you can use for your adventure. For each of them, it will give you some basic descriptions of the setting as well as setting-specific archetypes, items and adversaries. It will also give you examples using Fantasy Flight game settings, such as the Science Fiction setting using the Android or the Fantasy setting using Terrinoth from Runebound and Descent. Among the GM Toolkit section at the end of the book, it will also have info on creating your own skills, archetypes, talents, items and adversaries so you are able to make your own setting utilizing the tools from their pre-made settings and the creation rules.

While I really like Genesys, my favorite part of the system is the original setting that utilized the system: Star Wars. Fantasy Flight Games made 3 different Star Wars RPGs that each utilized the same basic rules, but with different focuses: Edge of the Empire which focused on bounty hunters and smugglers in the Outer Rim, Age of Rebellion which focused on the Galactic Civil War between the Empire and the Rebellion and Force and Destiny which focuses on Jedi and the Force. After the success of those games and a lot of additional books adding more content, Fantasy Flight made a generic version of the system that Star Wars used and called it Genesys. So while Star Wars technically doesn't use Genesys, Genesys is a direct successor to those Star Wars games. Unfortunately, as of this post going up, the Star Wars core rulebooks are currently unavailable, but they should hopefully be back in stock soon.

What I like about Genesys is the dice pool system it uses. Because of its unique dice (thanks Fantasy Flight!), the different results on dice make for more interesting results than just checking numbers. While I do enjoy PBTA's 7-9 partial success result allowing for success with a setback, Genesys allows for success with a setback or failure with an advantage which makes for some interesting storytelling decisions. For example, leaping across a gap as success with setback might mean making the jump, but the ground behind you falls apart while failure with advantage might mean missing the jump, but landing in a cave with a MacGuffin on the walls. The system's many different outcomes means you have to be creative with the storytelling and make for a system that is more story-oriented than one that is focused on stats and numbers.
Genesys and its associated books are available now from our webstore. 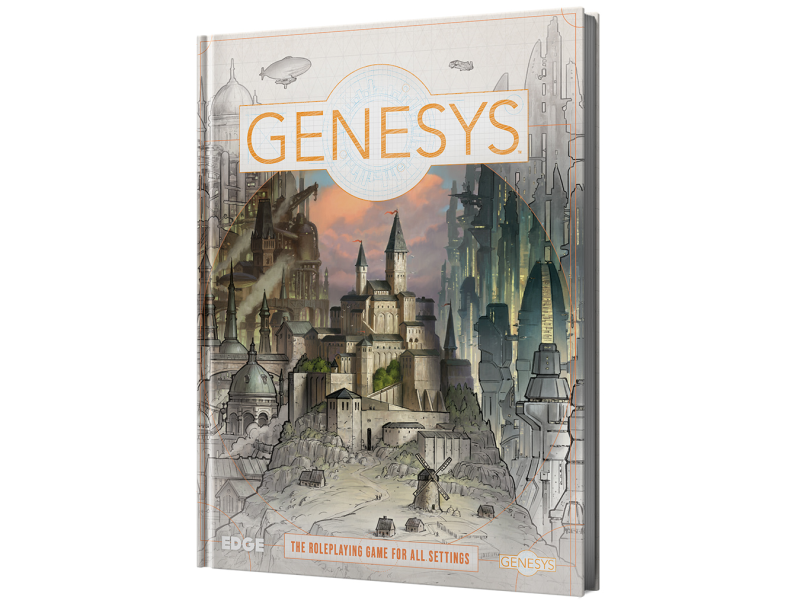