Marvel Champions: The Galaxy's Most Wanted

The Galaxy's Most Wanted is a large box expansion for the Marvel Champions Living Card Game from Fantasy Flight Games. It adds on two new heroes, Rocket and Groot, as well as five new scenarios featuring the Brotherhood of the Badoon, the Collector, Nebula and Ronan the Accuser as enemies to fight, as well as a campaign where you can play through all 5 scenarios with special rules.

My friend already talked about Marvel Champions in general in his staff pick, but here's the basics of how the game works. First, each player selects a hero to play. Then, you select a villain to fight that will come with a main scheme and let you know how to build their encounter deck. During gameplay you will attack the villain or their minions, thwart the villain's schemes and play allies, upgrades, supports and events. After each player takes their turn, then the villain and minions will attack you or scheme depending on whether your hero or their alter ego is currently active. If your heroes can defeat the villain and their upgraded second form, then your group wins. If the villain completes their main schemes or takes out a hero, the villain wins.
The Core Set for Marvel Champions comes with five heroes and three villains and they've added additional heroes and villains through Hero Packs, Scenario Packs and the Rise of Red Skull Campaign Expansion. With The Galaxy's Most Wanted, they're adding in more heroes and villains. As I mentioned, the heroes they're adding are Rocket and Groot from the Guardians of the Galaxy, as well as five scenarios where you have to face the Badoon, the Collector (twice), Nebula and Ronan. As with the Hero Packs, you can play the Rocket or Groot decks against any of the villains they've put in the game, and as with the Scenario Packs, you can play any heroes against the new villains. As with Rise of Red Skull, you can also play through a campaign where you keep the same heroes and fight through each of the villains in order, with some additional benefits and challenges from being in a campaign.

Rocket has a very aggressive deck with lots of card draw from either side of his card. As his hero, whenever you deal excess damage to an enemy, you get to draw a card. As his alter ego, once per turn you can discard a Tech upgrade in order to draw two cards. His deck features a good amount of Tech cards, most of which are weapons that come with charge counters that limit uses, but give you extra power. The starter deck he comes with uses the Aggression trait and has lots of cards to deal excess damage to minions, like Into the Fray or Relentless Assault. On the opposite side of the spectrum, Groot's deck is more about obtaining and using his growth counters. As his hero, instead of taking damage, you remove growth counters from him. As his alter ego, once per turn you can add two growth counters to him (to a maximum of 10). His deck features a lot of cards that will either add more growth counters, or let you remove them to ready him or get additional THW, ATK or DEF. The starter deck he comes with uses the Protection trait and focuses on defending especially when taking no damage with cards like Desperate Defense or Hard to Ignore.
Each of the scenarios throws new dangers at you. Drang and the Brotherhood of the Badoon come with the Badoon Ship that deals damage to each player once it fully charges, but also gives you the Milano which can give you a Wild resource once per turn normally, but when a card calls for it, remove threat from enemy schemes or protect you from Peril Treachery cards. One scenario has you infiltrate the Collector's museum, where he is trying to add items to The Collection, winning if his scheme gathers enough threat or if The Collection gets too full. The Collector's other scenario has you attempting to escape from his museum which plays out differently from other schemes as you do not win by defeating the Collector, who is an Elder of the Universe and cannot be killed, but by defeating each of his three scheme cards, each of which will give you additional benefits and challenges upon defeat like adding in the Milano, then adding in challenges for the Milano to overcome. Nebula is attempting to escape with the Power Stone and adds more evasion counters to her ship to make her escape, while gaining a lot of techniques that make her much more annoying to fight. Ronan is trying to take the Power Stone from you and is a powerful threat with his ship adding extra encounter cards and his Universal Weapon granting him additional power and defense, all while getting more powerful either attacking the player with the Power Stone or making it difficult to stop him once he has the Power Stone.
As mentioned above, the campaign takes you through each of the villains and their scenarios in order with extra benefits and challenges. In the campaign, there is a Badoon Headhunter trying to take you out. Each time you're able to defeat him, he comes back in the next scenario with an additional card to make things more difficult. There are also side schemes for each scenario that start in play and give some additional rewards at the end of the game if you thwart them. At the end of each game, you'll earn units based on how well you did and you can spend them to buy cards from the Market, allowing you to improve your deck as you go. There are also some situations you keep track of at the end of a game that affect the next one, such as the cards that were in the Collector's Collection when infiltrating the museum are removed from your deck when trying to escape the museum and the player who ended up with the Power Stone after fighting Nebula gets targeted by Ronan immediately.

I'm a big fan of the Guardians, so I was super excited to get the Galaxy's Most Wanted Expansion in order to play with Rocket and Groot. They are both really fun to play as they each offer a new gameplay that is different from heroes that came before them while still being able to utilize cards that came before. For example, I put cards like Hall of Heroes from the Thor Hero Pack and Moment of Triumph from the Ant-Man Hero Pack in my Rocket deck to get more benefits from taking out minions and cards like Unflappable from the Doctor Strange Hero Pack and Never Back Down from the Quicksilver Hero Pack in my Groot deck to make my defending even more powerful. The new cards this set adds for heroes are also pretty fun with Hard to Ignore being a powerful Protection card that helps Protection characters get more thwarting and Looking For Trouble is an Aggression card that characters like Thor who want minions to fight a new tool that thwarts while helping you get more minions. The scenarios are also pretty interesting to face, as each one offers different challenges to overcome that, like the heroes, have gameplay that's unlike what's come before. Both of the Collector's scenarios have interesting ways they work that make them fun to play against, where you have to keep how large the Collection is in mind when defeating minions while infiltrating the museum and having to thwart to win instead of dealing damage when escaping. As a campaign, it is fairly challenging, as the Headhunter has a lot of health and adds more obstacles as you go. The extra side schemes are weird, as you mostly don't care about them during the standard campaign. They give you an extra unit at the end, but the 2nd, 3rd and 4th side schemes have a detrimental effect when defeating them, so you have to decide if the extra unit is worth spending the extra thwart and taking the extra hit. The expert side schemes are much harder to deal with as they have more threat on them and have negative effects you want to deal with, but the standard ones are just kind of there for the most part.
If you're looking to add more cards to your Marvel Champions set, you get a whole lot of value with The Galaxy's Most Wanted Expansion with two new heroes and five new scenarios and a campaign with both standard and expert difficult settings. It'll also be a good investment with the upcoming Hero Packs that add in more of the Guardians, with Star-Lord and Gamora up for preorder now with a May 14 release date and Drax and Agent Venom coming out later this year. Star-Lord is going to be especially interesting to work with Rocket and Groot as his deck cares about characters with the Guardian trait, so he'll have tools to help them out, plus the Basic Rocket and Groot allies as well as the Starhawk and Bug Allies from this box. 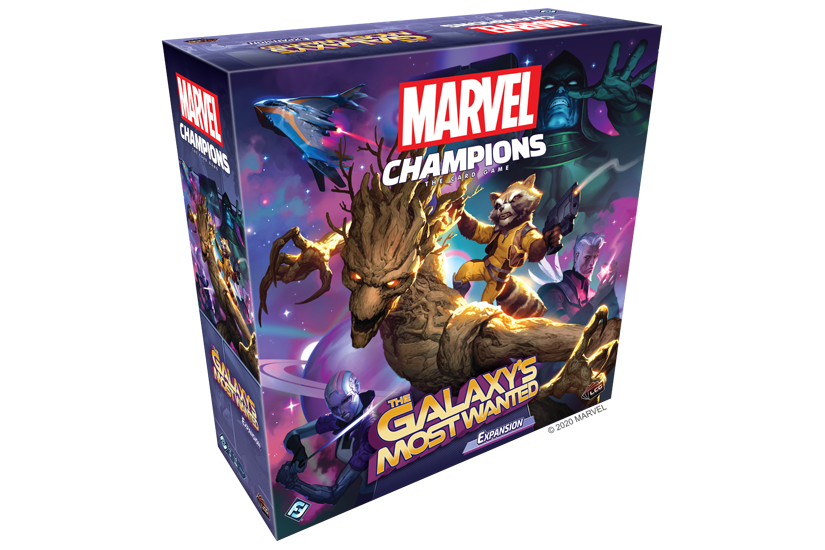