Marvel Multiverse is an upcoming RPG from Marvel Comics that has a playtest version out now. It is the most recent iteration of a Marvel comics RPG using its own system. In it, you can play as an established Marvel character or make your own character to fight evil in the Marvel universe.

Marvel Multiverse uses its own d616 system, named after the reality where most Marvel comics take place, Earth-616. With the system, you roll 1-3 d6 and add a stat bonus for any given action with one of the d6 being the Marvel die. The Narrator will have a number to compare to and if you hit that number, you succeed. While you generally want high numbers, a 1 on the Marvel die counts as a 6 and a Fantastic Roll where you have something positive happen even if you fail and a roll of 616 with a 1 on the Marvel die and 6s on the other dice is an Ultimate Fantastic Roll that automatically succeeds no matter what.

A lot of the playtest book is dedicated to building a character or at least showing how you can build some characters as they intend to have many more options in the full book. Like with D&D's Player's Handbook, there's a lot that goes into creating a character with a lot of choices and a lot of flipping through the book. To create a character, you'll need to 1) Choose your character's Rank (basically power-level), 2) Create a Concept (the non-gameplay idea of your character), 3) Choose an Archetype (basically a D&D Class), 4) Choose your Ability Scores (allocating points based on Rank), 5) Choose Origin, Profession and Traits (traits are additional effects you have, with origins and professions giving you some traits), 6) Choose Power Sets and Powers (your Rank determines how many power sets and powers you get), 7) Calculate your other Scores (Health, Focus, Karma, Initiative Modifier, Speed, Fight Damage, Ranged Damage and Size). I built my favorite character, Gwenpool, based off the rules from the Playtest rulebook and feel like I got a pretty good incarnation of the character you can check out below.

The most important thing right now about the Marvel Multiverse RPG is that it is currently a playtest version and you can submit your feedback to them for the full release. While it is not currently the full game, it is also a reasonable $9.99 for a 120 page rulebook that includes a lot of information on character creation and includes examples of some popular characters like Spider-Man, Black Panther and Wolverine so you can play as an established Marvel character or your own character.

One thing I'd like to note is that it feels like the designers were trying to get people who had only played D&D before to understand their system. What do I mean by this? Combat features an intiative system like D&D and combat actions like D&D with being able to move, take an action and a bonus action all in one initiative round with movement defined by feet in the same way and similar rules for grappling and picking objects up with sizes being a factor. And while it isn't rolling a d20 for actions, rolling d616 is pretty similar in most outcomes. Marvel Multiverse also takes advantage and disadvantage from D&D and turns them into rerolls that you or the Narrator get to ask for. It isn't exactly D&D, but definitely feels like they took a lot of influence from D&D.

As a playtest book, it is also designed for people who already play roleplaying games. If you want to run a game and haven't run games before, you're out of luck as the 3 page Narrator section has no rules and is just there to let you know that there will be more rules in the full book, but that you should run the game like any other game for now.
I mean, if I'm being perfectly honest here, my favorite part about this game is that it's a Marvel superhero game, if you couldn't have guessed from my pick from last month or a few months ago or my choices for favorites from last year or upcoming this year. I love Marvel comics and have for my whole life. If your game allows me to play my favorite Marvel characters, I'll probably give it a try. That's included playing really bad games that were just cashgrabs like Recharge to perfectly fine games like Heroclix to my favorite TCG of all time, VS System. And while I love Cortex and the Marvel Heroic RPG, this is a new RPG experience with official content forthcoming, which does give it one advantage.
All in all, while it doesn't feel like a complete game, it also isn't trying to be. I like it as a prelude to a full Marvel RPG and look forward to playing the full game when it comes out.
The Marvel Multiverse RPG: Playtest Rulebook is available now from our webstore. 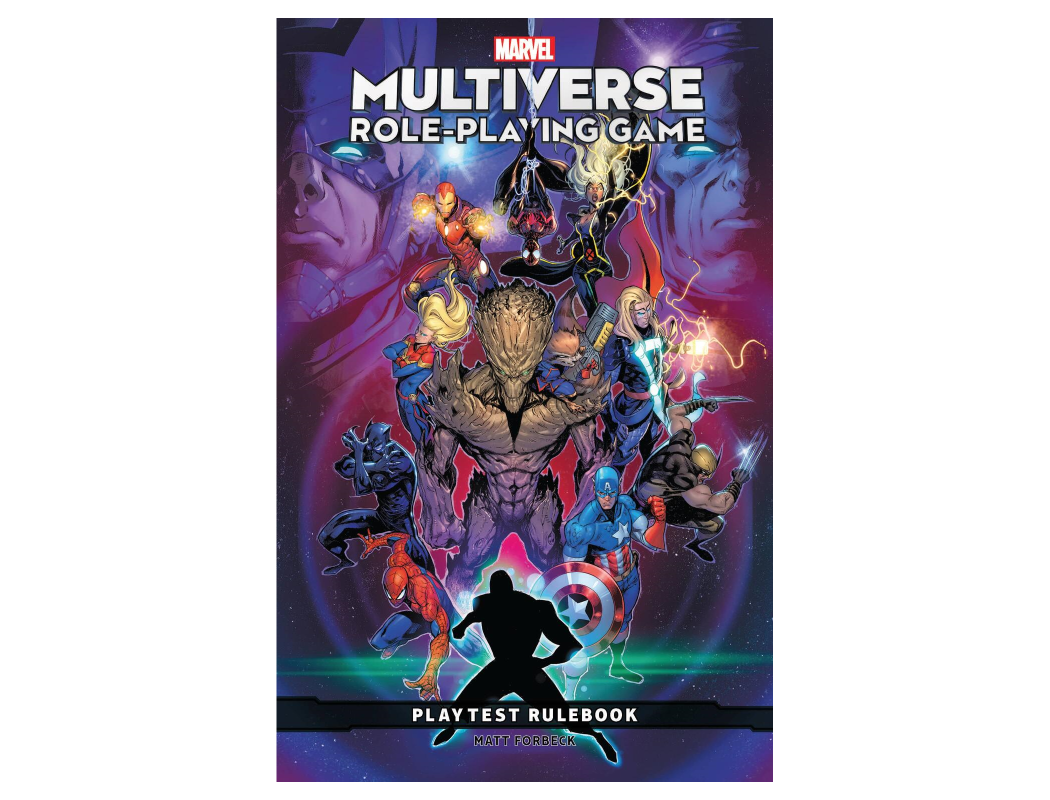