My review this month isn't going to be about a specific game, but a game genre that I like. I like playing Roll & Write games. In fact, most of my previous reviews have been for Roll & Write games. It's a genre that, while seemingly restrictive, actually allows for lots of different games, both abstract and more literal, and with a complexity level that, while variable, is exactly the range of complexity that I want in a game.

Okay, so how does a Roll & Write game work? The term for the genre comes from the main mechanic that's present or riffed on in each game. Any given turn will consist of dice being rolled and the outcomes of those dice determining what you write on your sheet. Now, the most well-known Roll & Write game is Yahtzee, a game that predates the term Roll & Write by quite a bit. In Yahtzee, you roll 5 regular 6-sided dice (and get to re-roll up to two times per turn) and get to fill in a spot on a scoresheet based off of the roll. So, if you get a "full house" (a 3-of-a-kind and a pair), you can score 25 points in the "full house" box on your scoresheet. After you've filled up all the boxes with a point-value (potentially 0 in some), you add up all the boxes and the total is your score. A lot of Roll & Write games will come with a scorepad of sheets that you fill in each game to determine your score and will be filled up in a similar way to Yahtzee.

But not all Roll & Writes end up being rolling dice or even writing numbers. Deadly Doodles has the same basic concept, but calls itself a Draw & Draw, since you draw cards and then draw the rooms on a map. It still fits the category because you are still randomly determining the actions available for a turn, then filling in space with your choices, but is technically not rolling and writing. A good amount of Roll & Writes will forego one of the titular aspects and replace it with drawing. A lot will feature drawing cards instead of rolling dice and a lot feature drawing a map or shapes instead of writing, but as long as the game features randomly determining a feature and then marking something based off of the random feature, the game fits into the genre.

What can you do with Roll & Writes? Well, Patchwork Doodle is a Roll & Write, based off of the fantastic 2-player game Patchwork, where you roll a die to determine which card gets picked, and then you draw the shape listed on the card onto your quilt, trying to fill the quilt as best you can before the end of the game. Deadly Doodles, as mentioned earlier, has you drawing cards with different paths on them, then drawing those paths onto your dungeon map, trying to accumulate treasure and weapons, as well as defeat monsters. Ganz Schön Clever and Doppelt So Clever are games where you roll differently colored dice, then use those dice to write numbers and X's in areas corresponding to the colors of the dice. Silver & Gold is a game where you draw a card with a shape on it, then draw that shape onto one of the two island cards you have, trying to fill those islands to earn points. Welcome to DinoWorld is a game where you roll 3 regular 6-sided dice and use those results to draw paths, facilities and dinosaur pens in order to make the most popular dinosaur theme park you can. The Blokus Dice Game has you rolling dice to determine which set of shapes you pick from to draw onto your board, filling your board with the same basic restrictions as the regular Blokus game. Roland Wright: The Dice Game is one where you roll dice to determine which colors of dots you get to draw onto your board, trying to use different colored dots and abilities to fill out different configurations to earn points. And these are just differences in the genre from games I've reviewed on this site. There are great games that have you building a railroad system, filling out homes in suburbia, mapping out the area of a kingdom, playing a game of Tetris or gathering and delivering resources while encountering different experiences through travel, as well as a lot that are completely abstract and have no theme.

While you can have lots of themes, the variance in gameplay is not to be understated either. Yes, they all feature randomization followed by marking based off the randomization, but there's lots of different ways it ends up playing out. For example, Patchwork Doodle is a puzzle game all about arranging shapes correctly and fitting them together well, while Welcome to DinoWorld is a game about managing a map, trying to determine how you want to arrange dinosaur pens and paths between them, as well as what dinosaur pens you can afford to power with your limited power stations. Even games that feature similar styles of marking can play out pretty differently. Going back to Patchwork Doodle, in that game, you can see what potential options will be available on any given turn and draw the piece for that turn wherever you want, trying to maximize future options. In The Blokus Dice Game, while you still are drawing shapes trying to fill your board, you have diminishing options based off of what number you choose and have restrictions as to where you can actually draw pieces, giving you a different experience even with very similar concepts.

Okay, so I've talked about the basic conceit of Roll & Write games and how different they can end up. Why then do I love the genre as a whole? Well, the basic mechanics are pretty simple, which means that gameplay itself is often pretty simple. While there can be more complicated actions you can take on any given roll/draw (eg Welcome to DinoWorld has you utilizing your three dice for three different actions, of which there are multiple options for each), generally figuring out what you can do on a turn is pretty straight-forward. Since you randomize the action(s) available, you often will have limited options each turn, which is what makes a turn more straight-forward. That being said, a Roll & Write game can still end up with a decent amount of complexity from how you want to utilize your choices. Ganz Schön Clever and Doppelt So Clever both end up being somewhat trickier to initially figure out since they have 5 different areas to mark, each of which has its own way of marking and scoring, but because of the limited amount of options, it's not an insurmountable amount of complexity. I often like more middle-of-the-road options, aka the "baby bear" approach. For example, with roleplaying games, instead of the looser nature of games like Fiasco or more in depth approach of games like Pathfinder, I like Powered by the Apocalypse games which are looser than Pathfinder, but have more structure than Fiasco. In that vein, I like Roll & Write games because they offer more interesting gameplay than very basic games like Monopoly or Life, but are easier to pick up than heavier games like Twilight Imperium or Scythe.

One last reason I like Roll & Write games is that they don't have as much interaction between players, meaning that you can't be completely screwed over by a person taking an action. Often the only interaction between players is one player getting to restrict some of the options available by taking them first. In Silver & Gold for example, the only time what you do affects other players is taking an island card from the display and getting a coin trophy. Both of these don't stop other players from acting; they just make the person have different choices and get less points respectively. This lack of interaction also means that a lot of Roll & Write games can be played solo and not have the game be affected too heavily by a lack of players. If there is interaction that can affect outcomes, there is often just a solo variant that will either add a phantom player or limit what options you have. Some of them do offer a more interesting solo variant though, like Roland Wright, which adds a board that you interact with using the other dice available. Because I often can find myself playing games solo, I appreciate Roll & Write games for giving me something I can do by myself or with friends at a later date. 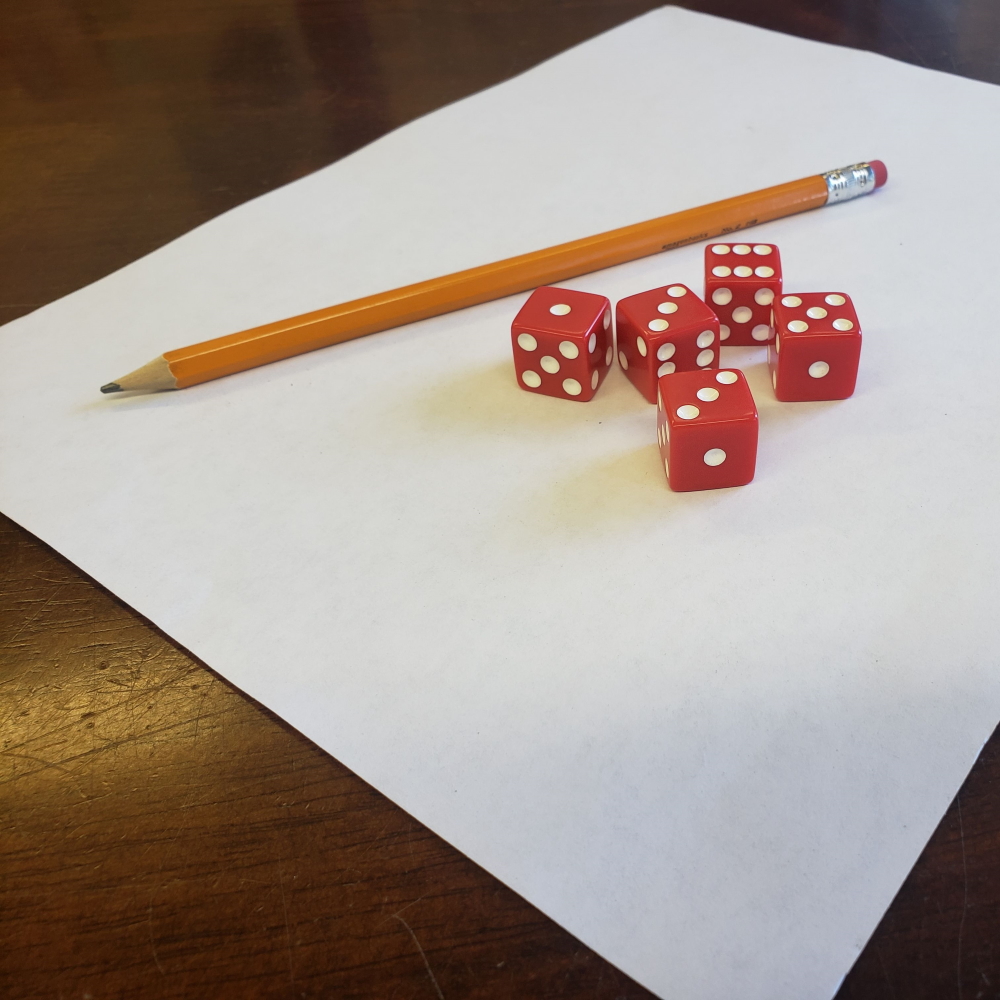